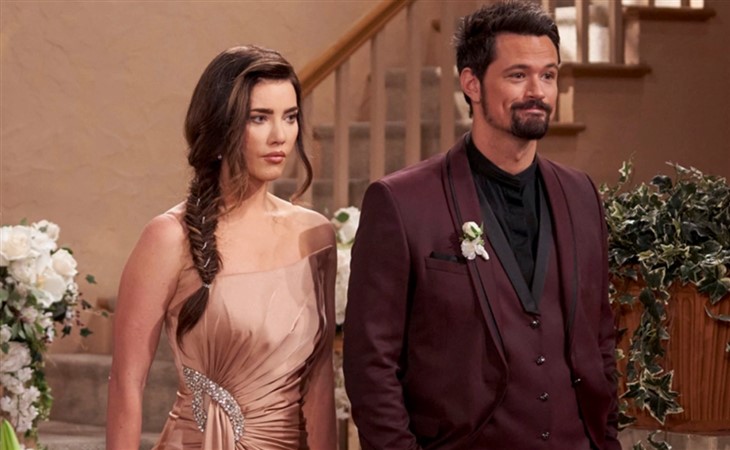 It looks like Taylor would tell the truth, but Soap Opera Digest informs the soap fans that Steffy finally speaks up after no one else does. She refuses to let her father marry her mother without knowing all the facts.

The Bold And The Beautiful —Steffy Forrester’s Conflicted

Steffy wants her parents to remarry, but she doesn’t want Ridge Forrester (Thorsten Kaye) to begin his marriage based on a lie. Part of her believes that Ridge will still want to marry her mother after he finds out Thomas faked the CPS call with a voice-changing app.

“Steffy is so mad at Thomas. She wanted Ridge and Taylor to come together because they realized they belonged together, not through a lie. She is happy that Douglas (Henry Joseph Samiri) told the truth,” Jacqueline MacInnes Wood shared with Soap Opera Digest.

When Ridge and Taylor exchange vows, Steffy realizes that Taylor doesn’t plan on telling Ridge the truth. Unable to hold it in anymore, Steffy speaks up when Carter Walton (Lawrence Saint-Victor) asks if anyone objects to this union.

Steffy hoped Thomas would step forward, but that didn’t happen. She thought Taylor would surely speak up, but she remained silent.

“When Steffy realizes that Ridge is entering this marriage based on a lie, she objects. Ridge told everyone all he wanted was someone who wouldn’t lie to him,” Wood explained.

After Steffy’s big reveal, Ridge is speechless for a moment. For Thomas to have manufactured the lie that ended his marriage to Brooke Logan (Katherine Kelly Lang) leaves Ridge feeling deceived.

“I think it was a big deal for him to walk away from Brooke to be with someone else. But now, of course, he feels betrayed because he left her or something that wasn’t her fault,” Thorsten Kaye explained.

The Bold and the Beautiful Spoilers: Steffy Steps In And Stops Ridge And Taylor’s Wedding #bb #boldandbeautifulhttps://t.co/MzB8LFRkKX

Kaye shares that this could be the thing that changes Ridge’s relationship with Thomas forever. Sure, Thomas has pulled some devious schemes, but this time, it was all based on a lie.
Ridge won’t forget that Thomas did this and how much he wanted to be with Brooke. Instead, he planned to marry Taylor, even though his heart wasn’t in it.

B&B fans, do you think Ridge will forgive Thomas? Keep watching B&B to see how this all plays out next week.