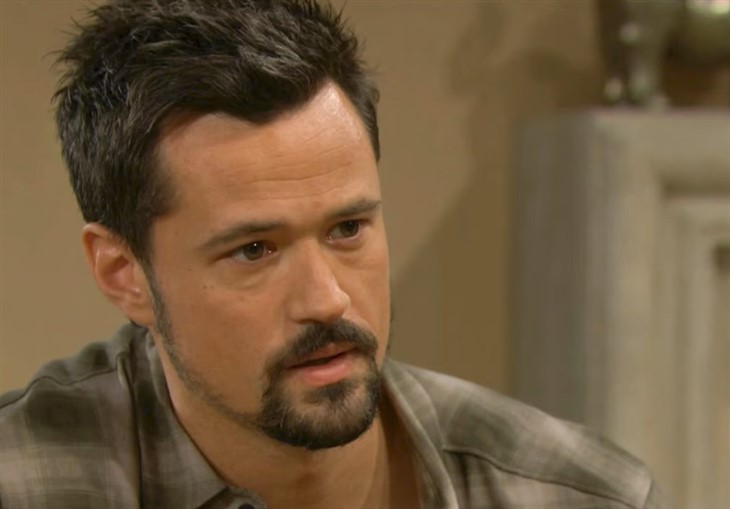 The Bold and the Beautiful spoilers document that Thomas Forrester (Matthew Atkinson) knows he should not have allowed his son to keep the evidence of his crime. But he did that because of hubris, and now, Thomas will switch places with Brooke Logan (Katherine Kelly Lang).

Ridge Forrester (Thorsten Kaye) is teased to learn the truth. Brooke did not betray him and the Forrester family. Thomas did.

Steffy Forrester Finnegan (Jacqueline MacInnes Wood) thankfully went to her nephew’s room to check on him. Douglas Forrester (Henry Joseph Samiri) was depressed because that smart young man could not think his way out of another problem his father caused. Wood’s character is teased to expose Thomas during the remarriage ceremony.

Ridge’s behavior was unexplainable. Why would he suddenly decide he needed to split from Brooke and remarry Taylor Hayes (Krista Allen)?

The foolish mistake Brooke admitted to and repeatedly apologized for was well behind them. It has nearly been a year since she drank with Deacon Sharpe (Sean Kanan) at her home on New Year’s Eve, and he stayed over in what proved to be a non-event.

But Ridge believed he heard proof of Brooke’s report to Child Services. Thomas’ plan worked, with Brooke made to look like the queen of drama once again. But Thomas was the hidden drama king.

Brooke suspected something was off with Thomas when she saw him using a knife to cut an apple in front of Douglas. His actions, in and of themselves, were not the real issue. Instead, Brooke took them as a sign that he was pretending to be well.

Ridge offered a recent clue, when Brooke pressed him, telling her that she could not get beyond her grudge against Thomas. But that made no sense at the time because she had done nothing against him except tell him not to use the knife in front of Douglas.

Brooke also felt that Thomas was behind Ridge breaking from her. But she lacked evidence to prove it.

Ridge badly misjudged his now-annulled wife. He can not simply explain himself and expect all to be well again.

Brooke will need time to process what she learns. The feelings of Ridge’s intended wife must be fully considered as well.

The Bold and the Beautiful Spoilers: Hope And Liam Now Have The Longest Running Marriage On The Show#bb #Boldandbeautiful

Taylor’s actions, following the reveal that happened minutes before the remarriage ceremony, are also vital and play into what happens on B&B.