Days Of Our Lives Spoilers: ‘Ericole’ Implodes After Eric Finds Out Nicole Influenced Jada To Abort 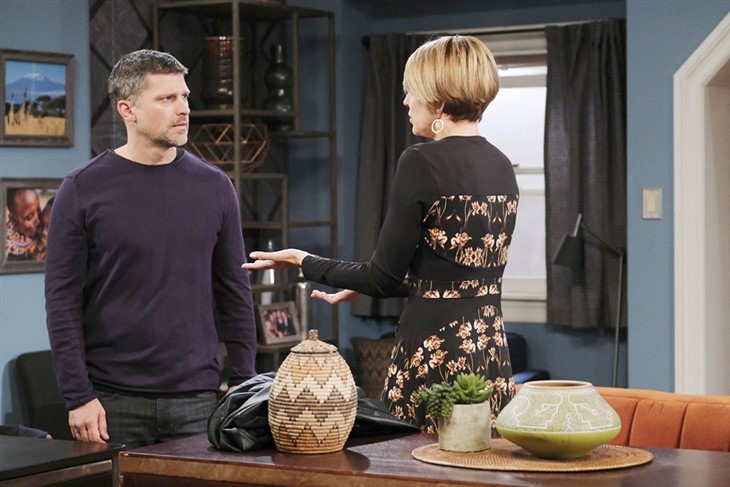 Days of Our Lives spoilers and updates tease that ‘Ericole’ will implode after Eric Brady (Greg Vaughan) finds out the bad news from Jada Hunter (Elia Cantu). Jada likely decides to terminate her pregnancy and it’ll get back to him Nicole Walker (Arianne Zucker) was a big influence in her decision.

After that emotional interference by Nicole, listing all the reasons why Jada shouldn’t have Eric’s baby, and everything that could go wrong, she thinks twice about continuing her pregnancy. She decides to terminate and may even have her abortion procedure done before saying anything to Eric about it – after all, her body, her choice. Initially, she had decided to have the baby but the thought of being tied to nosy and intrusive Nicole forever made up her mind.

Nicole made sure that Jada understood Nicole would be a part of her life, because she would be part of the package when co-parenting with Eric, which Nicole didn’t want. While Eric is out bragging about becoming a father, and being congratulated by Brady Black (Eric Martsolf) among others, Jada will be aborting the baby.

When Jada tells Eric there will be no baby, she undoubtedly will cite Nicole’s unsolicited advice and reasons why she should terminate although Nicole didn’t come right out with it. Eric will be devastated after having his hopes up for a child of his own, and he’ll go ballistic on Nicole for her interference. The Days of Our Lives winter preview shows Eric as he blasts Nicole, telling her Jada’s pregnancy was none of her damn business, her interference making the former priest cuss! Nicole will likely explain she didn’t want Jada to go into what being a single mother is like blind, and have a realistic idea of what it might be like. There will be a massive blowup between the two over Nicole’s part in Jada terminating her pregnancy, full well knowing what being a father would mean to Eric.

Days Of Our Lives Spoilers – How Could She?

Eric will be hit hard and heartbroken after bragging about being a new father, finally, of his own child all over town and then having to tell everyone there’s no baby. It’s not a blow that Eric will easily recover from, so there won’t just be a easy forgiveness for Nicole, because he will directly blame her for influencing Jada to abort. Nicole has singlehandedly blown her reunion with Eric and likely their relationship and any future to bits by her swooping in to make sure he has no ties to Jada.

Viewers shouldn’t be surprised if Eric’s family and true friends advise him that what Nicole has for Eric is anything but true love. In the meantime, Jada’s burned her bridges with Eric as well, and there won’t be any reunion between them either.