General Hospital Spoilers: Nina Can’t Keep Carly’s Name Out Of Her Mouth — And Carly’s Had Enough 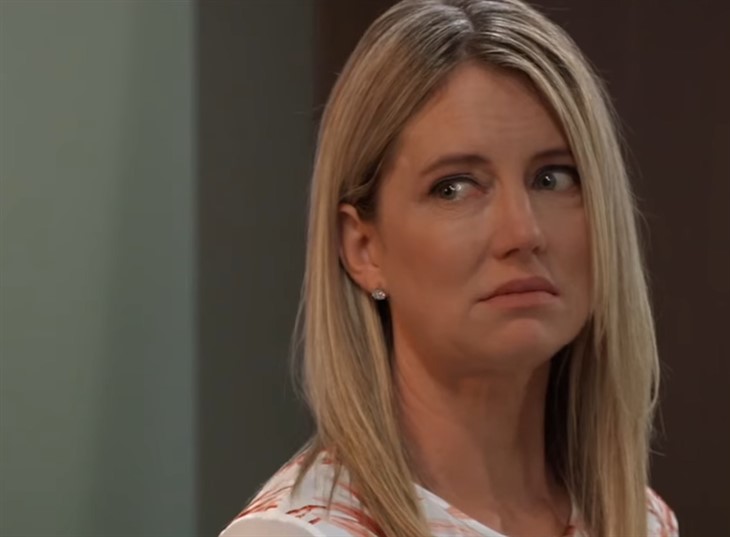 General Hospital spoilers reveals Nina Reeves (Cynthia Watros) and Carly Spencer (Laura Wright) are enemies in every sense of the word. The tables certainly have turned for these two women. Before Sonny Corinthos’ (Maurice Benard) dalliance with Nina in Nixon Falls, Carly had withheld the truth she discovered about Nelle Benson-Jerome (Chloe Lanier) being Nina’s daughter.

When Nelle died and Nina found out, it was too late for her to play mommy to Nelle or have a mother-daughter relationship with her. Nina has never forgiven Carly for this — not that Carly is asking for such forgiveness. On the flipside, Carly hardly blinked an eye when she found Nina in bed with Sonny on the Haunted Star. She was devastated that Sonny moved on so immediately before truly finishing his marriage with her, but she did what she always does and moved on as well. Nina’s got the guy. So why can’t she do the same thing?

Nina has a new business venture to manage — on top of still running Crimson Magazine and keeping Sonny happy, which is no small order. How is it she manages to still remain so preoccupied with what Carly is doing in her private time? When Nina opens her mouth again about Carly’s relationship with Drew Cain (Cameron Mathison), she’s going to do it intentionally because she’s trying to feel Sonny out and determine whether there’s any risk she will lose him to Carly as jealousy grabs hold of him.

The last thing Nina was thinking is that the little white lie she tells him about Carly and Drew moving forward with their relationship would cause Sonny to run right back to Carly to confirm it. Of course, Nina should know better given how quickly he sought out the source when Nina whispered things to him about Carly and Brick (Stephen A. Smith). Carly will be furious that Nina still hasn’t learned her lesson regarding making up rumors about her.

GH Spoilers – Hint Carly Spencer Won’t Back Down This Time

Last time we saw Nina and Carly butt heads, we almost thought Nina’s was going to be covered in a bowl of soup. Luckily, Carly said she had too much love and respect for the Metro Court Hotel and the other people who worked there to make that kind of scene or mess. However, next time, they’re going to be on more neutral territory when things go left. Will Carly hold back, or are we going to see Caroline Benson come out and show Nina how it’s done in Jacksonville?

It’s quite possible that neither Nina or Carly will walk away from this dispute spotless. Verbal sparring matches aren’t going to cut it anymore. Carly is at her limit, and Nina will see red when Carly implies Nina will never hold onto Sonny because he likes Carly to keep her claws in him. Will Sonny and Drew have to bail these two out? Awkward! Stay tuned for more GH news, updates, and spoilers as they become available.