The Bold And The Beautiful Spoilers: Steffy Strikes Back, Thomas Fired, Dream Team No More? 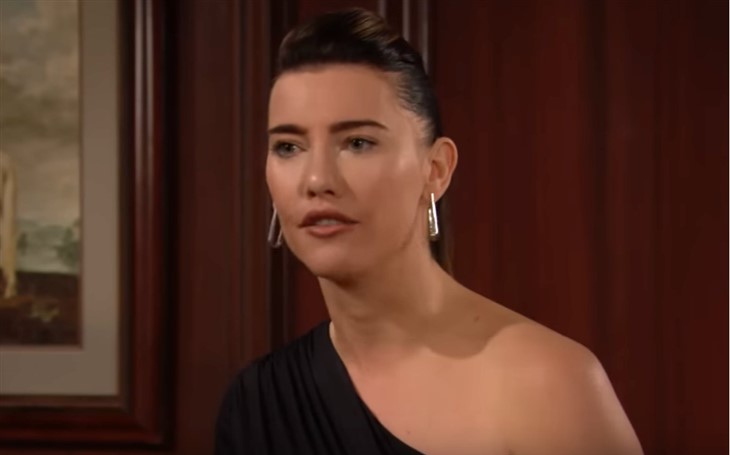 The Bold and The Beautiful spoilers and updates tease that Steffy Forrester (Jacqueline Macinnes Wood) will strike back hard against her deceitful brother. Now that he’s been outed by Douglas Forrester (Henry Joseph Samiri) at what was supposed to be their parents’ wedding, the first punishment for Thomas is getting fired!

The Bold And The Beautiful Spoilers – Operation Takedown

Ridge Forrester (Thorsten Kaye) couldn’t believe what he was hearing when first, Steffy objected to the wedding – not to her mom and dad’s remarriage, but the truth had to come out. As Ridge spluttered and stammered and wanted to know what Steffy was talking about when she said Brooke Logan (Katherine Kelly Lang) hadn’t called CPS on Thomas, Douglas played the recordings. Both Eric Forrester (John McCook) and John “Finn” Finnegan (Tanner Novlan) stood at the ready to protect Douglas should Thomas try to go for the boy.

Taylor Hayes (Krista Allen) nearly in tears tried to tell Ridge before the vows were said but couldn’t bring herself to. Steffy told Thomas to tell and he glared a hole through her so she started the process and Douglas finished it.

Now it’s time for Phase Two of the Thomas saga-payback time, and Steffy again takes the bull by the horns. It doesn’t take a meeting of the Forrester board of directors to fire Thomas even if he is a top designer, and he’s already destroyed his relationship with their dad. Ridge could not be blamed for disowning his son after the stunt he pulled, well-meaning in his own eyes or not.

The scandal that could erupt should someone find out what happened and make it go public-think Dollar Bill Spencer (Don Diamont) perhaps and his big mouth-would spell ruination for Forrester Creations. Thomas, however talented he might be, has to go; Vincent Van Gogh may also have had immense talent but like Thomas, had deep seated psychological problems.

The Bold And The Beautiful Spoilers – Friends, No, Family, Yes

Steffy is no friend to any Logan but acknowledges they are her stepfamily and it was wrong what Thomas did to Brooke and the Logans will find out. Chances are, Eric will tell Donna Logan (Jennifer Gareis) about what happened or Ridge may have ran out of the wedding to make amends with Brooke. Either way, Hope Logan (Annika Noelle) will find out one way or the other as well, and she’ll be one hundred percent on board with ditching the designer.

The Bold And The Beautiful Spoilers Ridge Proposes To Brooke, From Annulment To New Wedding, Taylor Heartbroken

As for the other fallout Thomas could face, he’ll blame his sister for telling but not show remorse. That may cause him to lose any custody of Douglas and his mother could even commit him to a mental health facility for treatment.