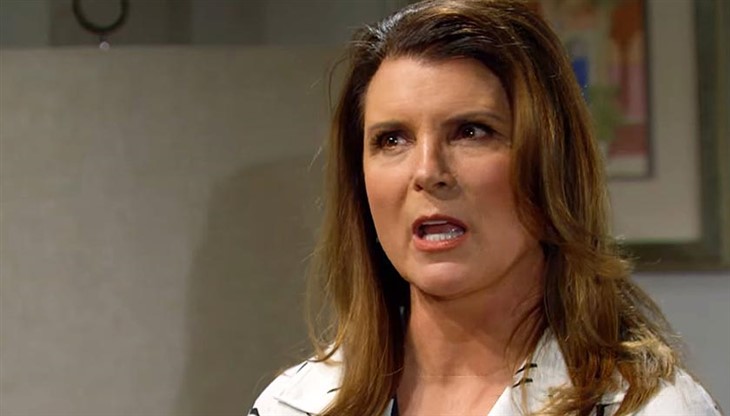 Assuming Ridge Forrester (Thorsten Kaye) makes peace with Brooke and potentially reconciles with her, Deacon will be officially shutout. Deacon’s marriage proposal was turned down, and he planned to commiserate with her following Ridge’s anticipated nuptials.

Sheila favored Taylor in the recent past but was not in favor of her taking Ridge away from Brooke because doing so was distracting Deacon, who Sheila needs to maintain control over.

The Bold And The Beautiful Spoilers – Brooke Logan A Fluid Enemy

Sheila can not stand Brooke. So, her desire to see Ridge be with Lang’s is hardly the hope of a friend.

Viewers saw Sheila recoil the first time Deacon mentioned Brooke was dropped by Ridge. Sheila’s comeback from the dead was predicated on using Deacon for sanctuary, which he provided.

Deacon has not fallen in love with Sheila. But he is clearly under her spell. She has helped him fill the loneliness gap, distracting him from his now-failed attempt to win Brooke back.

Sheila has been open with Deacon about her plan to reconcile with Finn. While that seems impossible, Sheila is determined to follow through with a plan she is developing but has not revealed.

John Finn Finnegan (Tanner Novlan) would never accept his returned mother because of what happened on the Il Giardino property where Sheila is currently living with Deacon. Shooting Finn was a mistake, but only because he stepped in front of the gun his mother aim and then fired at Steffy Forrester Finnegan (Jacqueline MacInnes Wood).

Seeing Sheila go to the cliff house on more than one occasion means she will venture out again. Her Lina costume allows for mobility that would not be possible if she only fronted her true self in Los Angeles, California.

Deacon has not felt compelled to turn Sheila into the authorities. Beyond his grudging affection for Brown’s character, Deacon is operating in self-preservation mode.

Kanan’s character knows his parole would be revoked and he would return to prison for an indefinite amount of time if the authorities ever learned he was protecting a famous fugitive who faked her death. However, Deacon would surrender his freedom if he felt that Hope Spencer (Annika Noelle), his granddaughter, Beth Spencer (Madeline Valdez and River Davidson), or Brooke was in danger.

Sheila knows where Deacon’s deepest loyalties lie. Viewers will see if her cunning nature is overshadowed by the reckless streak that fans have applauded for decades on B&B.