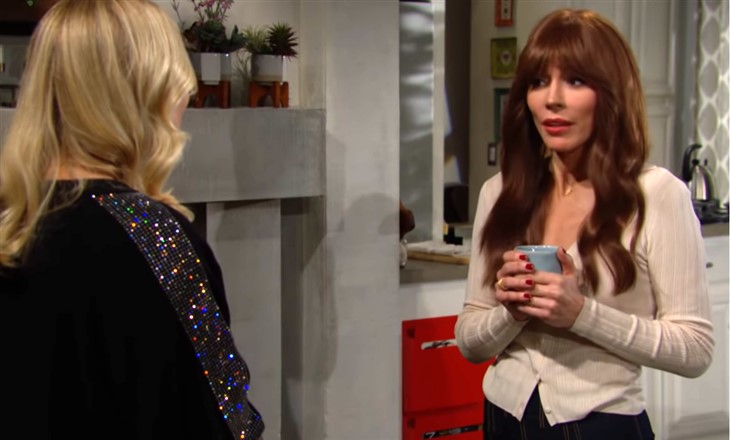 The Bold and the Beautiful spoilers document that Taylor Hayes (Krista Allen) believes in love. So much so that she rationalized Ridge Forrester (Thorsten Kaye) flying to Aspen, Colorado. He did not provide a good explanation why he wanted to leave Brooke Logan (Katherine Kelly Lang).

Just before the intended remarriage, Taylor admitted that Ridge not mentioning Brooke’s betrayal was telling. Yet, Allen’s character planned to push on to the Forrester living room ceremony.

Now, after the soap was spilled, Taylor realizes that she still stands behind Brooke and likely always will.

The Bold And The Beautiful Spoilers Ridge Proposes To Brooke, From Annulment To New Wedding, Taylor Heartbroken

The Bold And The Beautiful Spoilers – Returning From Missionary Work

Taylor was in Africa in recent years. TPTB are believed to have offered Hunter Tylo (the original Taylor) a chance to reprise a role she most recently held in 2019.

Tylo’s choice not to return produced the recast decision. Allen has performed well, developing her version of this legacy character. This actor has projected a fine blend of vulnerability and steadfastness in the current storyline, creating a believable outcome.

As it stands, Ridge is trending toward asking Brooke to forgive him. He obviously made the wrong call, with the pun intended, because Thomas Forrester (Matthew Atkinson) is the eternal bratty teenager.

Ridge has excused away his oldest son’s behavior on so many occasions. It is not surprising that Thomas’ latest misdeed scorched his father.

Instead of pushing Brooke out of the Forresters’ lives forever, Thomas’ plan creates momentum for Ridge and Brooke to reunite and marry for an amazing ninth time. Kaye’s character was only married to Taylor twice.

But fans must wonder if Brooke will be willing to overlook what Ridge did to her and if Taylor will admit defeat once and for all.

Ridge allowed his worst fears to be preyed upon by Thomas. Rather than give Brooke a chance to defend what Ridge assumed she had done, he provided no real for wanting an annulment.

The location shoot in Aspen provided another memorable series of visuals, following B&B’s tradition of gorgeous non-studio settings that include storyline-shifting drama.

While in Colorado, Ridge wronged Taylor by pledging his love to her. He was not wrong to do so. But he knew she was a rebound from Brooke.

Taylor knows that Ridge sees her as second-best. Brooke realizes that Ridge retains a distrust in his head.

So, why does Ridge deserve to be with either lady on B&B?