General Hospital Spoilers: Victor Visits Spencer — And Hopes For A Meeting Of The Minds With Cyrus 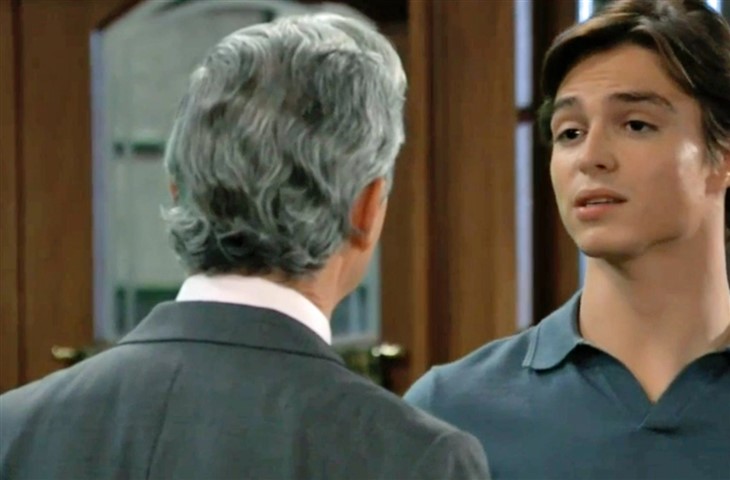 General Hospital spoilers tease Victor Cassadine (Charles Shaugnessy) always has an agenda. There’s never a moment he isn’t plotting, planning, or scheming. Someone will usually pay a price for the plans he has in store, but as long as it doesn’t impact him, he doesn’t care. When Victor heads to Pentonville, it will look like he’s there to see his nephew, Spencer Cassadine (Nicholas Chavez), and he is, but that’s not all he’s up to — as usual.

Victor is headed to Pentonville to see Spencer. He’s just moved into Wyndemere, and he needs Nikolas Cassadine (Marcus Coloma) to stick to his promise of divorcing Ava Jerome Cassadine (Maura West). He knows having Spencer back home under the same roof will only strengthen the Cassadine family and help make sure Ava never moved back to the castle on Spoon Island.

However, he’s going to struggle to convince Spencer that Wyndemere is the place for him to be. As he paints a less than comfortable picture of the accommodations at the Metro Court Hotel in hopes that Spencer will change his mind, he’s going to remind his uncle where he’s been staying for nearly three months and how much perspective it’s given him. How is Victor going to win Spencer over?

GH Spoilers – Indicate Spencer Cassadine Is Only Half His Interest

Victor might not have the manpower he needs to convince Spencer this is in his best interest, and he notices while visiting him that someone else may have some pull with him he didn’t expect — his other uncle, Cyrus Renault (Jeff Kober).

Victor has wanted to find an in-road with Cyrus for some time now, because it would only be beneficial to him to have someone with that level of connections on his side in Pentonville, and it’s just gravy that he happens to be Laura Collins’ (Genie Francis) brother. Spencer might part ways with Uncle Victor and head back to his cell, but Victor isn’t leaving just yet.

When Cyrus sits down with Victor, the Cassadine mastermind is going to cut straight to the chase — after a little flattery in an attempt to butter Cyrus us. However, those old tricks might not work on the new Cyrus, who has given his life to God and hopes to help others do the same.

Victor needs someone in his corner in Pentonville, and his resources are spread thin these days. Holly Sutton (Emma Samms) has just turned against him, and he needs help finding Anna Devane (Finola Hughes) so she can be locked up where Victor wants his associates behind bars to do her in. Will Cyrus come to his aid — uncle to uncle — or might he surprise Victor and suggest he find a holier path to walk and give up this game of revenge? This will be a true test of Cyrus’ claim that he’s changed his ways. Stay tuned for more General Hospital news, updates, and spoilers as this plot continues to thicken.