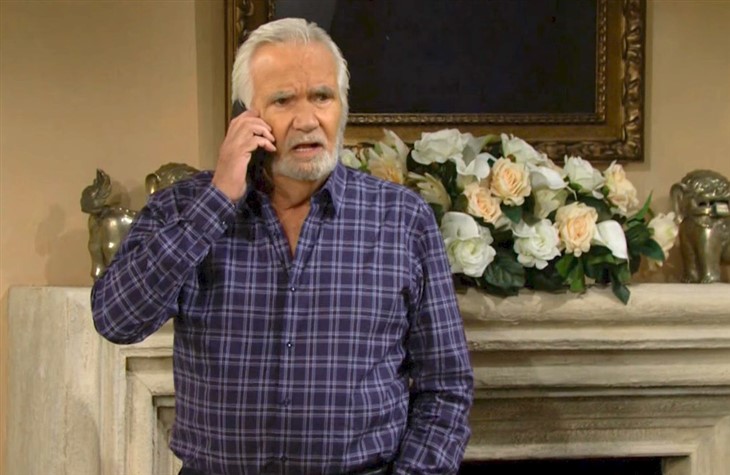 The Bold and the Beautiful (B&B) spoilers tease that Eric Forrester (John McCook) will feel blindsided by Thomas Forrester’s (Matthew Atkinson) evil scheme. It never occurred to him that Thomas could do something so cruel and mean-spirited.

When Ridge Forrester (Thorsten Kaye) told Eric and the rest of the family that Brooke Logan (Katherine Kelly Lang) called CPS on Thomas, Eric had a hard time believing she would do something like that. Little did everyone know at the time Brooke never called CPS. Thomas called using a voice-changing app to frame her in a plot to destroy her marriage with his father.

Eric expressed his concern for Ridge, worrying his son might not know how to handle something like this. The concerned father expressed concerns about Ridge marrying Taylor Hayes (Krista Allen) soon after his annulment. He suggested he wait a little longer, questioning Ridge about his feelings for Brooke.

When Steffy revealed the truth about the CPS call, it blindsided Eric. He felt the weight of the revelation for Ridge and Brooke and couldn’t contain his anger toward Thomas for his evil scheme.

The scoop will send Donna reeling. She will conclude that Brooke was right about Thomas’s role in her annulment with Ridge. Donna could express her concern about Thomas living in the Forrester mansion. It could lead to Eric taking a stand against Thomas.

Bold and the Beautiful spoilers tease that Eric could order Thomas to move out of the house. He could tell Thomas that he and Donna don’t feel safe with him in the home after learning what he did to Brooke.

B&B Spoilers: Taylor Almost Goes Through With It, Was She Secretly Happy About It? https://t.co/3NYzNsddir #BoldTheBeautiful #Spoilers #BB pic.twitter.com/SoWdqSlYQd

It’s not looking good for Thomas on B&B. He will face the consequences of his actions. It will be difficult to redeem himself and get his family to trust him again. Do you think Thomas can come back from his latest scheme?