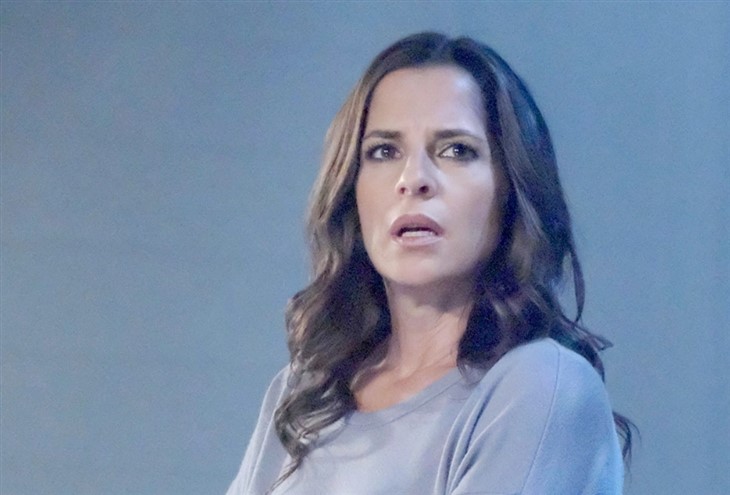 General Hospital spoilers tease Sam McCall (Kelly Monaco) wasn’t suspicious of Cody Bell (Josh Kelly) until he gave her a reason to be. The way Cody treated Damian Spinelli (Bradford Anderson) is something Sam isn’t soon to forget, and this guy just keeps giving her new reasons not to trust him. Most recently, Sam confronted Cody after realizing he was planning to claim the necklace in Britt Westbourne’s (Kelly Thiebaud) possession as his birthright.

This made everything click for Sam and she realized why Cody came to town targeting Britt. When they had words, Cody seemed to conveniently let it slip that even Dante Falconeri (Dominic Zamprogna) has secrets in his past that he wants to keep hidden. Wondering what Cody meant by that and whether there was any truth to it has been eating Sam alive ever since.

Sam has tried to forget about Cody’s veiled threat, but she is worried he might act on it. Obviously, she’s also concerned that her boyfriend is hiding something serious about his past from her — and she thought they were being honest with each other. Furthermore, if Cody is suddenly willing to start taking jabs at his good friend Dante when he feels backed into a corner, why should she go on believing Cody won’t try to hurt Spinelli with the information he still has on him? Sam has too many unanswered questions about this guy to go on hoping it all works out, and she knows there’s only one person who can possibly answer any of them — Dante.

When Sam brings up Cody, Dante will play along as his usual charming self wondering what the guy did this time. He’s expecting Sam to tell him it has something to do with the necklace or some other poor fella who didn’t start a chance against Cody’s con. Instead, Sam will catch Dante off guard when she suggests Dante may be a part of Cody’s next con. While Dante is certainly oblivious to whatever Cody has planned, he will be taken aback that Sam would ever believe Dante would be involved in anything like that. That’s when she will clarify she wasn’t implying he was, but that he may be a target Cody has in mind. However, Dante will have already stuck his foot in his mouth and it’ll get Sam thinking about how defensive he became when he assumed she thought Dante would ever con someone.

The long and short of it is that this conversation won’t lead Sam anywhere, and that’s going to leave her frustrated. Sam isn’t a fan of this kind of loose end. If Dante isn’t going to give her straight answers about his past, maybe it is worth looking into Cody’s juvenile criminal record after all. It’s not like she will know she’s really looking at Dante’s. Stay tuned for more GH news and spoilers to find out what it says!