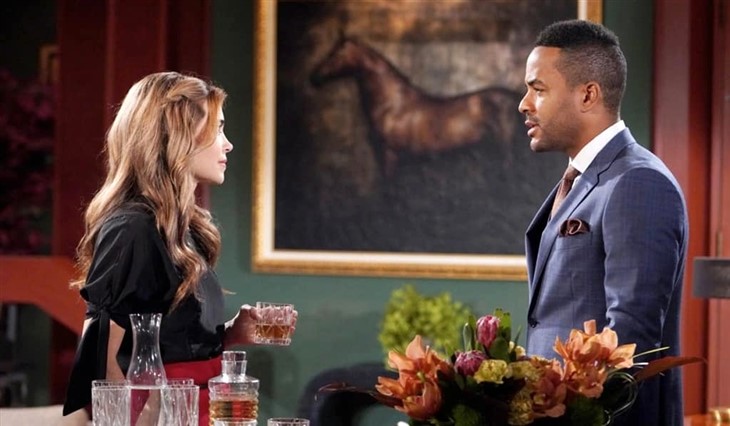 The Young and the Restless (Y&R) spoilers tease that Victoria Newman (Amelia Heinle) will reject Nate Hastings, Jr (Sean Dominic) idea of bringing Elena Dawson’s (Brytni Sarpy) podcast to Newman Media. It will be something that will upset Nate, as he thought he would have the creative power to bring the podcast to NM without Victoria’s approval.

Elena assumed Chancellor Winters would take on her podcast. However, Nate offered to bankroll her podcast and felt sure that Victoria would welcome the idea. It sounds Nate might see how ruthless and uncaring his new boss Victoria really is.

Nate never suspected that Victoria would have a problem with Elena’s podcast. Y&R spoilers tease that Nate assumes she would jump at the chance to bankroll the podcast. However, Victoria will be less than thrilled, rejecting the podcast, claiming it isn’t a good fit for Newman Media.

Y&R spoilers state that Nate will try to change her mind, but it won’t work. Victoria made up her mind and decided that it wasn’t the right fit for Newman. There won’t be anything Nate can do to change her mind.

When Nate breaks the news to Elena, she will feel conflicted. Y&R spoilers reveal that Elena will explain that she wanted to pitch her podcast to Chancellor Winters, but Nate offered Newman Media. He told her it was a sure thing, so she never met with Lily Winters (Christel Khalil) and Devon Hamilton (Bryton James) about her podcast.

All Nate can do is apologize. He will explain that Victoria decided the podcast wasn’t a good fit for Newman Media. Nate will disagree with her decision, but his hands are tied. Victoria refused to reconsider.

Young and the Restless spoilers tease that Elena will pitch her podcast to Chancellor Winters. She might worry that Victoria could take her podcast idea and hire someone to compete with her. After all, that is something that Victoria would do.

Nate thinks Elena is overreacting. If Victoria didn’t want the podcast, she wouldn’t steal her idea. Soap fans know that Elena could be right; Victoria would steal the idea if it meant she could turn that idea into dollars.

It sounds like trouble is brewing for Nate at Newman Media. Y&R fans, are you surprised Victoria rejected Elena’s podcast? Keep watching Young and the Restless, airing weekdays on CBS and streaming on Paramount Plus. This site is a leading source for everything linked to The Young and the Restless. Check back regularly for Y&R spoilers and news!