The Bold And The Beautiful Spoilers: Ridge Hits Thomas With His Next Move — Consequences For His Actions Hit Him Hard 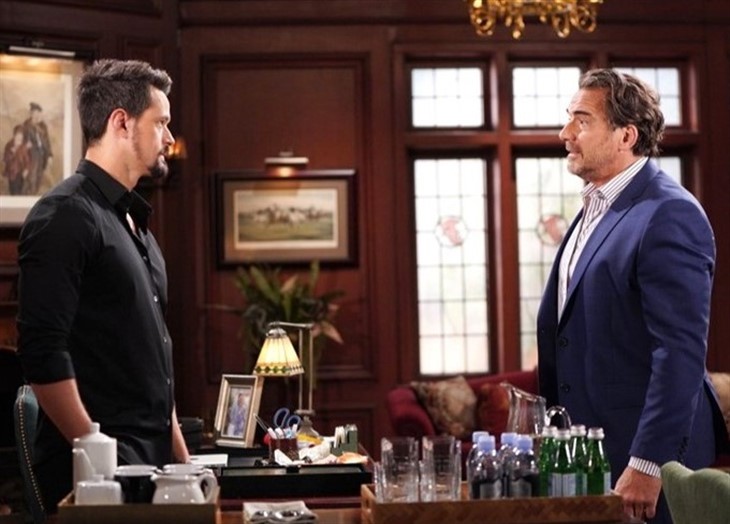 The Bold and the Beautiful (B&B) spoilers tease that Thomas Forrester (Matthew Atkinson) will face serious consequences for faking the call to CPS. Ridge Forrester (Thorsten Kaye) cannot believe his son would stoop to such levels to get rid Brooke Logan (Katherine Kelly Lang) out of his life.

Ridge told Thomas he loved him but went too far this time. He pointed out that Thomas has pulled stunts like this for years, but this time, he hurt the woman he loves. B&B spoilers state that Ridge threatened to talk to Eric Forrester (John McCook) to remove him from Forrester Creations.

The Bold And The Beautiful Spoilers — Thomas Forrester Loses His Job

Ridge told Thomas that looking at him turned his stomach. He raged that he couldn’t allow his son to continue to hurt the people he loved. Ridge won’t allow it moving forward. He will talk to Eric about his place at Forrester Creations to protect others from Thomas.

Thomas never imagined this scheme would cost him his job. He assumed he wasn’t replaceable, but his dad let him know that’s just not true. They can replace him, and they will do just that, depending on what Eric thinks.

B&B spoilers reveal that Eric will agree with Ridge about Thomas’s future at Forrester Creations. Eric could go a step further and suggest he should kick him out of the mansion. Eric might not want Thomas around after Donna Logan (Jennifer Gareis) learns of the fake CPS call and his attempt to frame her sister for making the call.

In addition to losing his job and possibly his place at Forrester’s mansion, Thomas could lose custody of Douglas Forrester (Henry Joseph Samiri). Thomas proved that he wasn’t a fit parent when he forced the young boy to lie for him. His insistence on Douglas keeping the voice-changing app recording a secret bordered on child abuse.

B&B spoilers state that Steffy will work to convince Liam Spencer (Scott Clifton) and Hope Logan (Annika Noelle) to take custody of the boy to protect him from any more abuse from Thomas.

B&B fans, do you think Ridge will fire Thomas from Forrester Creations? Keep watching Bold and the Beautiful, airing weekdays on CBS and streaming on Paramount Plus. This site is a leading source for everything linked to The Bold and the Beautiful. Check back regularly for B&B spoilers and news!