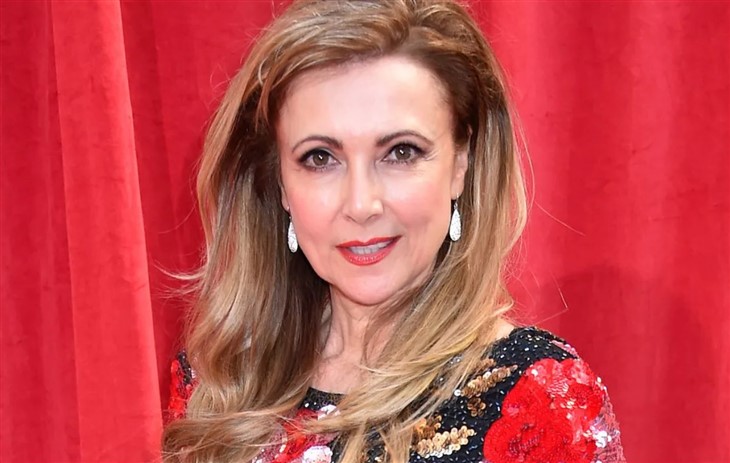 General Hospital spoilers reveal Holly is off finding her son for the foreseeable future as this storyline arc has come to an end. However, Emma Samms is not ruling out another return as she feels lucky at how accommodating the soap was to her Long COVID needs.

Watching Holly run around outside a cabin on fire is not something we had expected to see, but that is what we got. However, all was not as it seemed as Holly set herself on fire on purpose and was wearing flame-retardant clothing supplied by Felicia Scorpio (Kristina Wagner).

Robert Scorpio (Tristan Rogers) and Felicia got Holly a getaway car and all the other essentials she needed to break free of Victor Cassadine’s (Charles Shaughnessy) control and sneak off into the night to find her son, Ethan Lovett (Nathan Parsons), on her own.

The world now thinks Holly is in a burn hospital halfway across the world and even Victor won’t even wonder about that, will he? Maybe, maybe not. Remember, Holly also suggested that Selina Wu (Lydia Look) drug Victor, something she may have already started doing without him even knowing.

This all leaves the door open for Holly to return one day, either on a temporary or permanent basis, depending on GH’s needs, as well as Samms’ health. One thing she is grateful for is working on a show that meets her needs.

“One thing that makes me a lucky person, even though I got Long COVID, is that I’ve got employers who are willing to say, ‘Your health is more important than anything,'” Samms said in the December 12, 2022, issue of Soap Opera Digest. “That’s what I felt from Frank [Valentini] all along. I think that’s very unusual. Not many people would have a boss as good as he is who genuinely made me feel that my health was more important than any show, even his show, and I’ll always be incredibly grateful for that.”

Currently, Samms is back home in her native England and doesn’t know when or if GH might want her back again, but if the show comes calling, she now feels good about performing and bringing Holly to life again. Stay tuned to General Hospital weekdays to see how this story plays out.