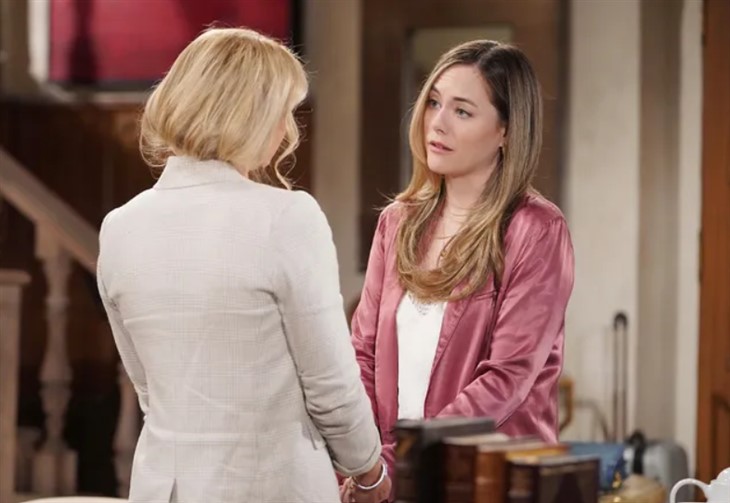 The Bold And The Beautiful spoilers indicate that Thomas Forrester (Matthew Atkinson) has royally messed up and Hope Spencer (Annika Noelle) has taken their son back home. Hope may even threaten to take Thomas to court after he tried to force Douglas to go along with his lies. Is Thomas afraid the court will terminate his rights?

The Bold and The Beautiful spoilers reveal that Hope has had custody of Douglas for some time. However, now that Thomas has been doing better, Hope has allowed him as much access to Douglas as he wants. Unfortunately, it seems that Thomas didn’t respect the length Hope went to for him. Thomas chose to try to force Douglas to lie about his Grandma Brooke Logan (Katherine Kelly Lang).

The Bold And The Beautiful Spoilers: Ridge Put Himself In Box – Thomas’ Future Cloudy

Thomas loves his son even though he tried to use him. Douglas deserves better out of his father and it seems that Thomas needs to take a step back and reevaluate his priorities. Thomas does not need to be around his son right now because he simply cannot be trusted. However, Hope may be more determined to take this to court because of her mom.

Thomas calling CPS could have put Hope’s custody in danger as well. Why would Thomas consider risking both his and Hope’s custody of their son? What does Thomas think will happen now that the truth about the call is out? Could CPS pull this case into court after learning what Thomas has done? Could the false report put Douglas’ custody at risk as well?

Thomas is starting to feel bad about what he has done. Not because he sees he was wrong, unfortunately, but because he ruined his parents’ reunion. The only reason that Ridge Forrester (Thorsten Kaye) went back to Taylor Hayes was because of that phone call. Thomas sees that in the end, Ridge did not love his mother enough to stay with her after all.

Will Hope use Thomas’ actions against him to gain full custody of Douglas? Will Hope ever be willing to allow Thomas around Douglas unsupervised again?