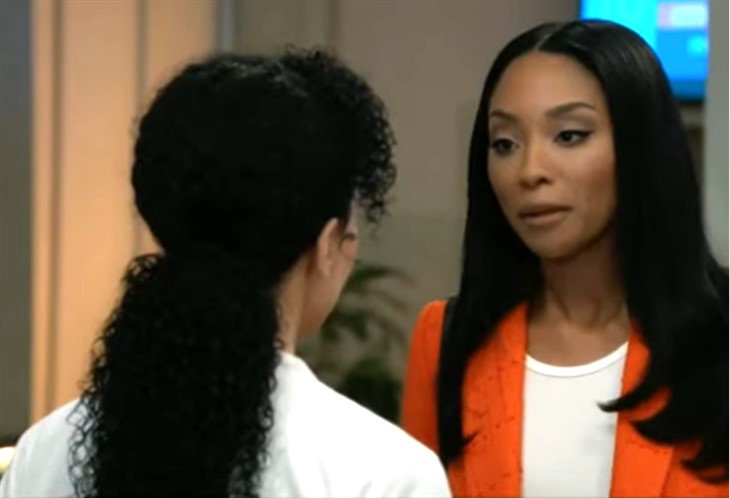 General Hospital spoilers reveals Jordan Ashford (Tanisha Harper) is going to be floored when she receives an invitation to Curtis Ashford’s (Donnell Turner) wedding to Portia Robinson (Brook Kerr). It’s not that Jordan isn’t happy for Curtis. She wants to be, but she knows too much. Curtis is still in the dark about the possibility that he is Trina Robinson’s (Brook Kerr) father, and for some reason, Portia is okay with leaving him that way — apparently for the rest of their lives.

Portia sees no reason to disrupt everyone’s world with the truth. Meanwhile, Jordan is struggling to maintain her friendship with Curtis and let him walk into another marriage of lies when she’s aware of the trap Portia is setting. Will she let him go through with this?

Jordan probably won’t feel right about attending Curtis’ wedding. What ex-wife would do such a thing anyway? She will probably assume the invitation was just a formality and felt like the right thing to do to Curtis and Portia, but Jordan knows Portia can’t possibly really want her there. When she sends in her RSVP, she will mark as not attending, and getting that news just might take the wind right out of Curtis’ sails.

GH Spoilers – Indicate Curtis Ashford Is Surprised, And Portia Pretends To Be

Curtis is going to want Jordan there on his special day, but he’ll try to understand if she’s not ready. Still, it’s not going to make any sense to Curtis that Jordan wouldn’t feel right about him moving on with his life and marrying someone else. Their marriage is over and they’ve managed to stay friends. Jordan and Portia get along well enough. So what’s the problem? As Curtis is mulling over what Jordan’s issue might be, Portia won’t be surprised at all. She knows Jordan doesn’t agree with her keeping the truth about Trina’s potential paternity hidden from Curtis, but she can’t exactly share that with her hubby-to-be. So she’s going to pretend to be just as surprised as he is — to his face anyway.

When Portia runs into Jordan again, she’s going to cut right to the chase. Portia will tell Jordan that her RSVP really caught Curtis off guard and got him thinking. She might go so far as to accuse Jordan of trying to invoke such a disturbance in Curtis, which Jordan will find laughable.

When Portia pushes Jordan too far and claims she’s jealous and just wants Curtis back, Jordan might clap back with her own accusation insinuating Portia hasn’t told Curtis the truth because she knows she would probably lose him. That’ll be the perfect moment for Jordan to level with Portia and tell her she better tell Curtis the truth before their wedding day, or she will. Keep checking back with us for more GH spoilers to find out which of these ladies ends up handing Curtis the biggest shock of his life.