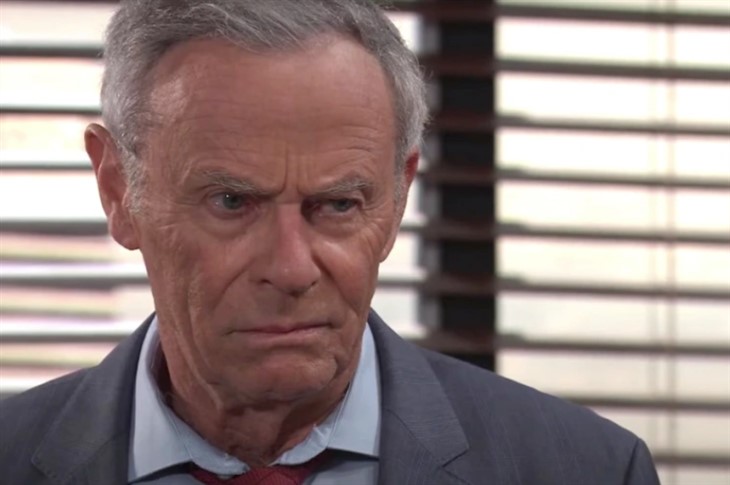 General Hospital spoilers tease that Robert Scorpio (Tristan Rogers) once again had to say goodbye to Holly Sutton (Emma Samms).  As viewers know, Holly had been forced to spy on Robert for Victor Cassadine (Charles Shaughnessy) because Victor was holding Holly’s son captive.  Robert figured out that Holly wasn’t being completely truthful and she eventually confessed everything.  With the help of Felicia Scorpio (Kristina Wagner), Robert and Holly fooled Victor into believing Holly was caught in an explosion with burns covering most of her body. Robert and everyone who cared for Holly were naturally quite upset by this turn of events.

But really Holly was just fine and was now free to find and free her son from Victor’s captivity.  So, while the world believes that Holly is seriously injured Robert knows the truth but has to pretend Holly might never recover.  Either way, this seems like the end of Holly and Robert’s romance, at least for now.  Robert and Holly seemed destined to be together but the timing never seemed to work out.

GH Spoilers – Diane Miller Might Be The Cure To Robert Scorpio’s Problems!

Meanwhile, hotshot lawyer Diane Miller (Carolyn Hennesy) is still recovering herself.  Weeks ago, she was attacked by the serial killer known as the Hook and almost died.  Robert sat by Diane’s bedside and told her stories to help her through the worst of it.  Diane is finally on the mend and might be exactly the person Robert needs to help him forget the mess with Holly. But will Robert tell Diane the truth about Holly’s fate?

General Hospital Spoilers – A new Romance In The Making!

Diane and Robert certainly have chemistry together.  And even though they have both been through hell these past few weeks, they might be exactly what each other needs to move forward.  Whether or not Robert clues Diane to the truth about Holly, may not make a difference.  Either way, Holly is out of Robert’s life at least for the time being and he is free to find love and romance with someone else.  And that person just might be Diane!

General Hospital Spoilers – What Do You think?

Will Holly rescue her son?  Will Robert clue Diane in regarding Holly’s fate?  Are Diane and Robert destined to become Port Charles’ newest couple? Anything can happen in Port Charles so stay tuned to General Hospital airing weekdays on ABC.  And don’t forget to check back right here regularly for all your General Hospital news, information, and spoilers!