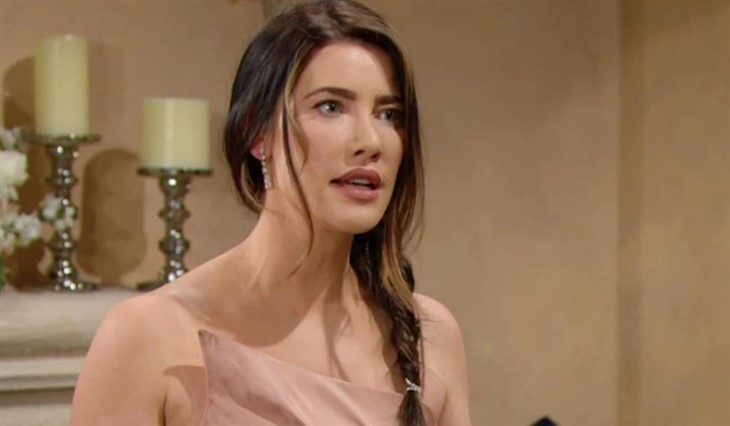 The Bold and the Beautiful spoilers document that Steffy Forrester Finnegan (Jacqueline MacInnes Wood) did what was needed. She spoke out when her mother could not bring herself to do so.

Steffy saved her mother from a delayed wedding fail. While the collapse of the awaited remarriage ceremony was hard, Taylor Hayes’ (Krista Allen) life would have been arguably far worse if Ridge Forrester (Thorsten Kaye) learned the reveal in the future.

Taylor was forced to deal with the shock of learning what her son, Thomas Forrester (Matthew Atkinson), did. She was more than conflicted.

If she told Ridge the truth, he was likely to begin fighting with Thomas. That is what happened after Steffy detailed the reveal and Douglas Forrester (Henry Joseph Samiri) played the digital recordings on his smartphone.

If Taylor held her tongue, as she did, then maybe she could tell Ridge what happened later, or everything would work itself out somehow.

Many fans can cite various excellent storylines and compare them to this one. In terms of revealed secrets damaging relationships, viewers recall Steffy seeking a paternity test that involved Bill Spencer (Don Diamont).

A most memorable scene outside the cliff house took place when Liam Spencer (Scott Clifton) happened to find a paper copy of that report in Steffy’s fashionably premium purse. Mega drama ensued.

So, Steffy knows how secrets can hurt a relationship. She did right by both of her parents in telling the truth. Ridge was disappointed in Taylor but not angry, like he is with Thomas.

Ridge loves Brooke Logan (Katherine Kelly Lang) more than Taylor. But Brooke did not immediately welcome him back into her life and home. That was the right choice.

Kaye’s character needs time to digest what happened, deal with Thomas, and talk to Taylor about where they do next. The enduring ties they have through children and grandchildren require a calm conversation in the near future.

As for Brooke, Ridge must make amends by living by his word if they are to reconcile. He can not assume she is always wrong and then withhold whatever he thinks he knows from the love of his life.

It feels like Brooke will accept Ridge’s apology, and they will marry for a ninth time, unless the annulment is nullified on B&B.