General Hospital Spoilers: Robert And Laura Team Up With Someone New To Take Victor Down 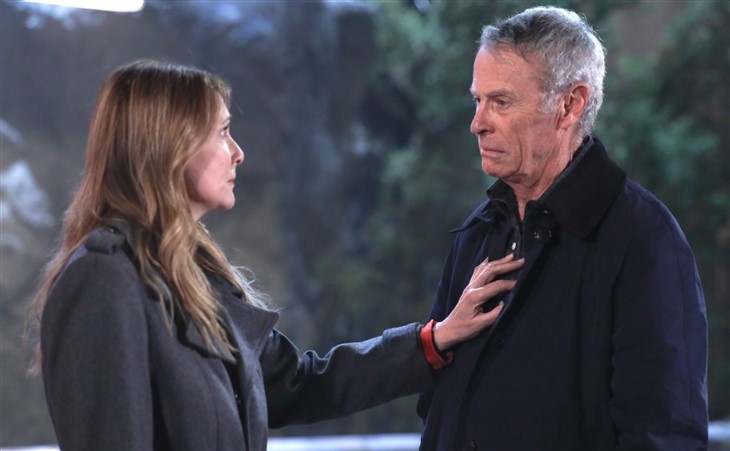 General Hospital spoilers reveals Robert Scorpio (Tristan Rogers) has said farewell to Holly Sutton (Emma Samms), who is off to save her son, Ethan Lovett (Nathan Parsons) from Victor Cassadine’s (Charles Shaugnessy) clutches. Some time ago, Robert came into information by way of Lucy Coe (Lynn Herring) that Deputy Mayor Eileen Ashby (Heather Mazur) was actually working with Victor. He and Laura have continued to operate as though they’re unaware of the secret connection, and they’re hoping it will only give them the upper hand as they try to get Victor put away.

However, they’re at a bit of a standstill even with Holly’s role out of the way. Victor thinks Holly is laid up in a burn unit somewhere, and Robert and Laura have plans to let him keep thinking that so she can free Ethan. However, that doesn’t mean they aren’t worried Victor is still going to let Anna Devane (Finola Hughes) take the fall for his antics. They need the help of someone with more connections though to see this through. Who might that be?

Laura can call on Sonny Corinthos (Maurice Benard) any time she needs him, and she knows it. So does Robert, who is most certainly less willing to tap the help of the mob to get things done. However, they might not have much choice when the time to help Anna starts to run out. Soon, she might be in danger, and she could be found and carted off to Pentonville. With the chatter between Sonny and Dante Falconeri (Dominic Zamprogna) regarding Dante possibly having to arrest his father someday, this could be a foreshadowing of what is to come. Might Sonny be locked up and unavailable to help Laura as the PCPD investigates him?

Laura has never needed resources outside of what Sonny can supply with his connections — until now. When she is desperate to save Anna — and Cyrus knows it — he might offer his help. However, rumor has it she’s going to have to work for it. Laura may have to ask Cyrus to assist her in this case. Will he boast and tell her how much of an inconvenience it is for him to dabble back in the world of organized crime he had left behind on his journey to finding God? Maybe, but he’s still going to go out on that limb to help her.

General Hospital Spoilers — What Might He Expect In Return?

In exchange for his cooperation, Laura might put in a good word with the parole board to help Cyrus get released sooner. However, that might not be enough for her big brother, who is hoping she will let him back into her should — whether he is released from prison or not. Cyrus wants the relationship he’s always wanted with Laura. Is she willing to reciprocate if it means saving Anna? Stay tuned for more GH news and spoilers just ahead to find out.