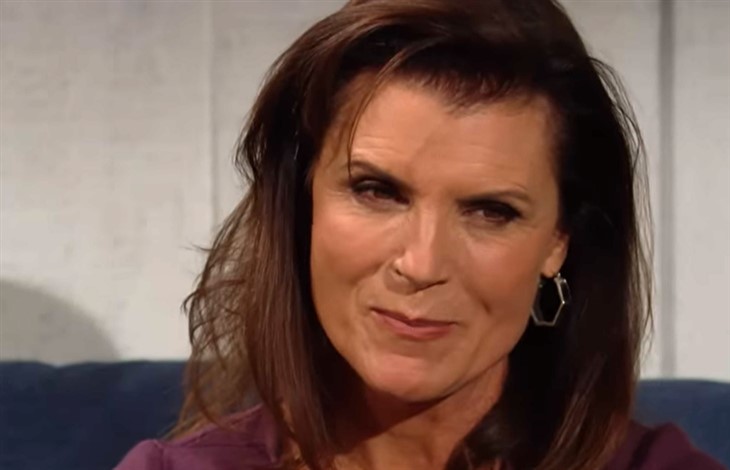 The Bold and the Beautiful spoilers reveal Sheila’s biggest secret coming to light — the fact that she is actually still alive.

The Forresters and Logans felt they could live in relative peace (for a soap opera anyway) without Sheila Carter (Kimberlin Brown) disrupting their lives anymore. After all, the authorities found her toe and that was all the proof needed that she was mauled by a bear and killed. Not her actual body — just her toe.

Of course, we know that is the furthest thing from the truth and she has been happily living with Deacon Sharpe (Sean Kanan) for months while enjoying a lit of sex in his tiny apartment. However, it was all too good to last.

When Detective Sanchez delivers the last of Sheila’s things to John ‘Finn’ Finnegan (Tanner Novlan), something seems off to him and he is sure that Sheila faked her own death. The first person he tells is Steffy Forrester Finnegan (Jacqueline MacInnes Wood) and they go searching for answers.

Playing detective, the first person Steffy and Finn decide to question is Deacon and he has to play dumb while freaking out inside. He knows if Sheila is found, then they are both headed back to prison. Plus, this puts Deacon’s relationship with Hope Logan Spencer (Annika Noelle) on the line after he worked so hard to become close to his adult daughter after all these years.

When Steffy and Finn leave, Sheila comes out of hiding and Deacon warns her she is going to have to find a new place to stay considering that the walls are closing in and she is about to be found out.

B&B Spoilers: Liam Has An Uncomfortable Run In With Bill, He’s Off The Rails https://t.co/iwrmnIC9fv #BoldTheBeautiful #Spoilers #BB pic.twitter.com/VoLJHC3A5h

Not surprisingly, Sheila has other plans. There is no way she is leaving Deacon behind and Deacon should be very, very afraid of that. He knows how obsessive she can be and she is certainly obsessed with him now.

Deacon should have taken all warnings about this woman to heart, especially after he learned that she was the one who shot Finn and Steffy and left them for dead. Deacon was the one who found them so he knows how horrifying that scene was. However, some people never learn. Stay tuned to The Bold and the Beautiful weekdays to see how this story plays out.