The Bold And The Beautiful Spoilers Sheila’s On The Run–Finn And Steffy In Danger? 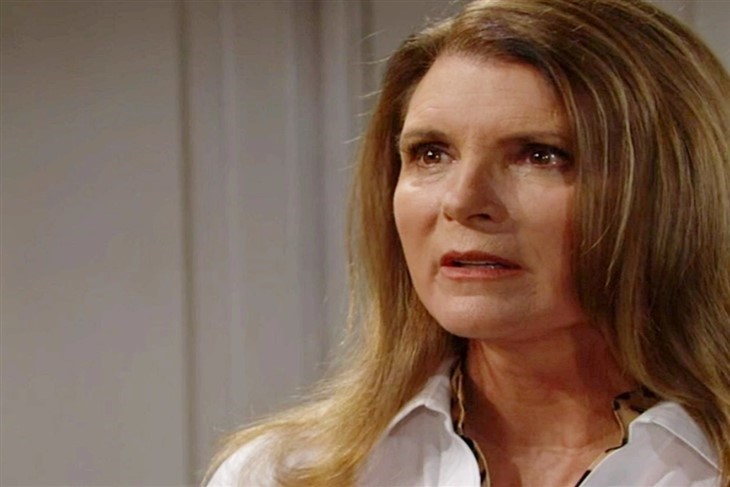 The Bold and the Beautiful (B&B) spoilers tease that Sheila Carter (Kimberlin Brown) will scramble after John Finnegan, AKA Finn (Tanner Novlan), and Steffy Forrester (Jacqueline MacInnes Wood) figure out the evil villain faked her death. Deacon Sharpe (Sean Kanan) will panic when Steffy and Finn corner him to help them set a trap for Sheila.

On Monday’s (December 5) show, Detective Alex Sanchez (Jeremy Ray Valdez) will deliver a special delivery to Finn. It’s Sheila’s severed toe, which puzzles Finn as it looks like Sheila chopped off one of her middle toes. It doesn’t look like a left-over body part from being mauled by a wild bear.

Finn will suspect right away that Sheila is alive and well. He wonders if she’s hiding out close by, a thought that terrifies Steffy. B&B spoilers state that Steffy will want to believe Finn’s theory about Sheila is nothing but paranoia. However, the more she thinks about it, the more plausible it sounds. Steffy will stand by Finn and join in his quest to prove that Sheila’s alive.

The thought of Sheila being alive terrifies Steffy and Finn. They know they must find out the truth because Sheila’s proven she’s deranged and cannot be trusted. They start the quest to find Sheila with Deacon.

Steffy and Finn decide the first person to turn to for answers is Deacon. B&B spoilers reveal they visit Deacon and ask him if he’s seen Sheila recently. Of course, Deacon will deny he knows anything about Sheila, but just because they suspect he might know something sends Deacon into panic mode.

Deacon will tell Sheila she has to find somewhere else to hide. He may urge her to stay at his place, and they’ll figure something out. When he goes out to run an errand, Sheila disappears.

After Deacon realizes that Sheila has vanished, he might turn on the villain. He knows that if he doesn’t protect himself, he could be in the hot seat, as he’s let her stay with him for months, hiding her out. It’ll get interesting to see how this storyline pans out. According to showrunner Brad Bell, Sheila’s storyline will last at least until Christmas.