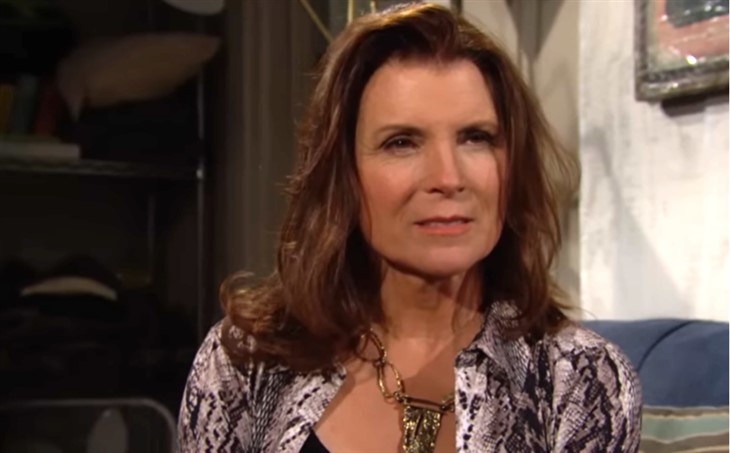 The Bold and the Beautiful spoilers document that Sheila Carter (Kimberlin Brown) donned a different wig after she rejected Deacon Sharpe’s (Sean Kanan) plea. Her chosen protector told Sheila time is growing short, and she must turn herself in, or he would make that call.

Viewers know that John Finn Finnegan (Tanner Novlan) recently decided to obtain his mother’s last remains. Detective Alex Sanchez (Jeremy Ray Valdez) obliged, telling Sheila’s known next-of-kin that the case is closed, and all remaining evidence would have been destroyed if he had not claimed it.

But Finn did claim Sheila’s remains, which included the believed toe that a bear did not consume when he mauled and ate Brown’s character in a wooded area.

The Los Angeles County authorities believed Sheila was dead and wrapped its case. But the staff is clearly lacking a Quincy, as played by the late, great Jack Klugman in the title role of a Los Angeles County medical examiner in a television series that ran from 1976 through 1983.

How could whoever the ME is miss what Finn fond? Novlan’s character told his wife that Sheila’s toe showed no evidenced of being ripped or torn. Instead, the break was clean.

Finn rightly believes that Sheila amputated her middle toe to fake her death. Viewers and Deacon knew for months that B&B’s greatest villain is alive, physically well, and living in LA.

Deacon’s tone has changed. He has convinced himself that, while the time with Sheila has proved interesting, her reckless mind will eventually lead to disaster.

If Deacon is calculating Sheila will be caught, he also appears to believe that she will turn him in as she promised. Even if Sheila shielded Deacon, it is reasonable to believe her anticipated capture would result in the police raiding his apartment and finding evidence that she was living with him.

Revoked parole is nearly certain if Deacon does contact the authorities. So, he is looking to mitigate his circumstances by doing what is best in the near future.

Sheila recently referenced Genoa City, Wisconsin. She could head for that destination if the police are onto her. But Chief of Police Paul Williams (Doug Davidson), who is unfortunately rarely seen, and lead detective Chance Chancellor (Conner Floyd) would likely be alerted on sister show, The Young and the Restless.

If Sheila intends to use her Lina disguise to make contact with Finn, then major drama is about to drop. Whether her timing proves wrong or right, fans feel that a storyline climax will soon arrive on B&B.