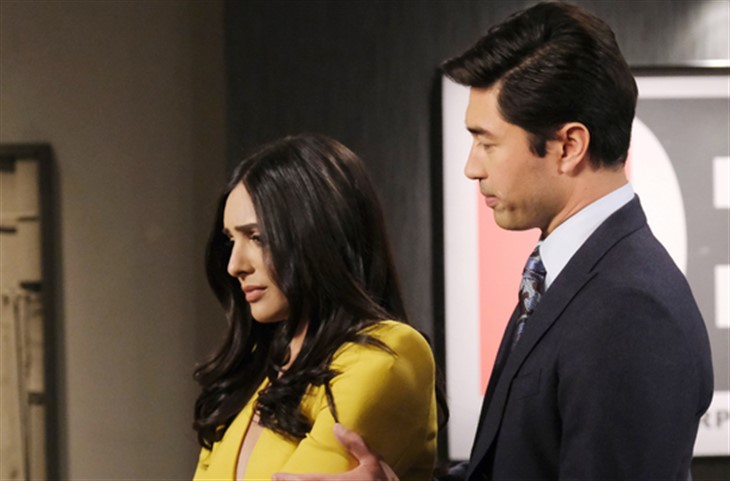 Days of our Lives (DOOL) spoilers and updates tease Gabi Hernandez (Camila Banus) is on a personal mission. Gabi has been in a relationship with Li Shin (Remington Hoffman). Gabi had wanted to find a way to get her ex-husband Stefan DiMera (Brandon Barash) back in her life. Gabi has found out that Li has plotted to keep her and Stefan apart.

Gabi had had been looking forward to getting married to Li. Gabi had thought that she had been able to put her feelings for Stefan in the past. Gabi could not remember that she had found out a secret about Li. Gabi had believed that Stefan was dead. Gabi had been devastated that Stefan died and she tried to find a way to move on without him. Gabi was shocked when she found out that Stefan had been saved by Dr. Wilhelm Rolf (Richard Wharton). Gabi hoped that she would be able to reunite with Stefan and was stunned when Stefan rejected her.

Days Of Our Lives Spoilers: Will And Leo Face Off, Sonny Divided

Gabi believed that Dr. Rolf had manipulated Stefan to push her away. Gabi decided that she needed to get the truth from Dr. Rolf. Gabi was able to get Dr. Rolf to confess that he had brainwashed Stefan to reject her because Li had wanted to keep Gabi and Stefan from reuniting. Gabi wanted to find Stefan to tell him that Li had brainwashed him but Dr. Rolf had been able to brainwash Gabi into forgetting that she knew the truth. Gabi remembered the truth after she had married Li. Gabi decided that she would leave Li and go to tell Stefan the truth. Gabi knows that Li wants to her to give him another chance. Gabi does not want to have Li in her life and intends on ending her marriage to him.

DOOL Spoilers – Gabi Hernandez Fights To Get Stefan DiMera Back

Gabi knows that she is going to have trouble getting Stefan to come back to her. Gabi knows that Stefan has wanted to be with Chloe Lane (Nadia Bjorlin). Gabi found out that Dr. Rolf had brainwashed Stefan to want to be with Chloe instead of her. Li had worked with Kristen DiMera (Stacy Haiduk) to keep Stefan away from Gabi. Kristen had wanted to be able to get Chloe out of Brady Black’s (Eric Martsolf) life. Kristen knew that Stefan had been in a relationship with Chloe before he had been with Gabi. Li and Kristen were pleased that Stefan decide that he wanted to be with Chloe instead of Gabi. Stefan had decided that he wanted to leave Salem when Gabi got married. Stefan invited Chloe to come with him to Miami, Florida. Gabi knew that Stefan and Chloe had gone to Miami and went to tell him the truth about Li and Kristen.

Gabi found Stefan and Chloe together in bed. Gabi told Stefan that he had been brainwashed to want to be with Chloe instead of her. Stefan told Gabi that he still wanted to be with Chloe. Stefan had hoped that Chloe would want to be with him but Chloe decided that they needed to have time apart. Gabi wants Stefan back and wants him to go to Dr. Rolf to get him to help him to remember his real feelings for her. Stefan is reluctant to go to Dr. Rolf because he believes that he does not care about Gabi.