Days Of Our Lives Spoilers: Nicole Tries To Fix Eric, Eric Blames Her For His Bad Behavior? 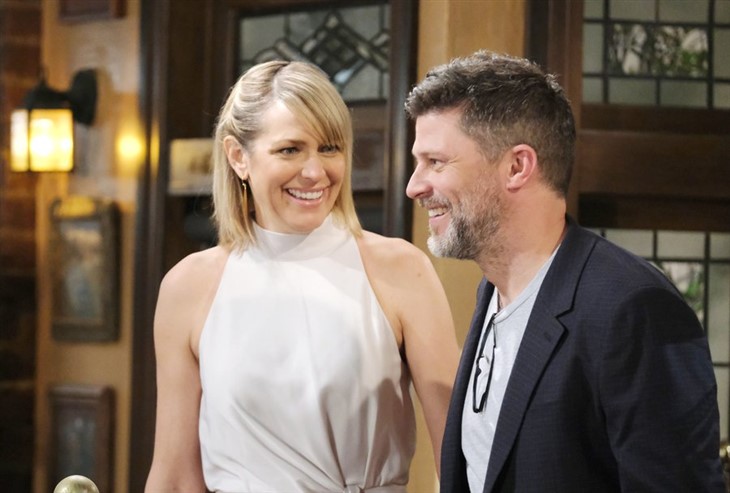 Days of Our Lives spoilers and updates tease that Nicole Walker (Arianne Zucker) doesn’t like Eric Brady’s (Greg Vaughan) recent behavior and she tries to fix him. Eric claps back and blames her for the way he’s been acting, she’s the one who denied him his chance at fatherhood!

Now is not the time for Nicole to approach Eric about anything at all, he is still reeling from her interference with Jada Hunter, (Elia Cantu) blaming her for the abortion. Plus he is dealing with the death of his father’s new wife, the relapse of his aunt and of his mother. Eric just wants to be left alone, and he doesn’t need Nicole being self-righteous at him and blasting him for holding a gun on Kristen DiMera (Stacy Haiduk).

Days Of Our Lives Spoilers: Lucas Lets Loose On Orpheus

Eric had a very good reason to hold that gun on Kristen, he was trying to force her to find the orchid that is so desperately needed to save lives. It may be too late for Kate Brady (Lauren Koslow) but perhaps Kayla Johnson (Mary Beth Evans) and Marlena Evans (Deidre Hall) could have been saved.

DOOL Spoilers – Who Are You To Judge Me?

Nicole starts to think she’s dealing with someone in an Eric mask instead of the real Eric, when he lashes out and asks her who she is to judge him? She’s also upset about him taking up with that slutty ambulance chaser Sloan Petersen (Jessica Serfaty) and Eric tells her to shut up about his friend. At least he didn’t respond by telling her it takes one to know one, like his twin Sami Brady (Alison Sweeney) might have. Nicole is very worried about Eric and his recent behavior, and thinks since she knows him better than anyone else she has the right to worry. But the more she prods, and the more she pries, the more Eric just wants her to stay away from him and leave him alone.

The meek and mild Father Eric of the past is no more – and his actions and the surly looks he gives Nicole should make that abundantly clear. Eric just wants to be left alone to live his life as he pleases and without Nicole’s interference. The rough time he is going through doesn’t need her in the midst of it going through it with a fine tooth comb.

Eric is angry, sullen, and belligerent and tells Nicole again if it weren’t for her interference Jada may not have made the decision she did. He meant it when he told her there was no forgiveness and no going back, she had burned all her bridges with him.