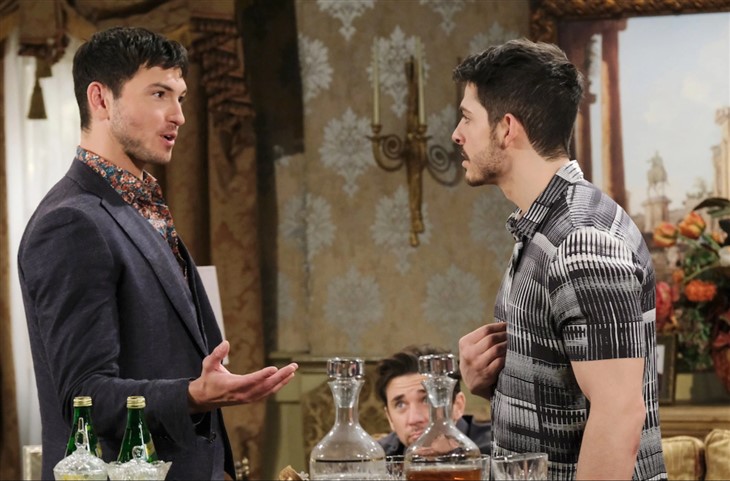 Days of Our Lives spoilers and updates tease that a guilty Alex Kiriakis (Robert Scott Wilson) will make a confession to Sonny Kiriakis (Zach Tinker). Alex feels horrible that his selfish actions of pressing ignore on Stephanie Johnson’s (Abigail Klein) phone caused her precious time with her mother.

While Kayla Johnson (Mary Beth Evans) was failing and dying in her room at Salem University Hospital, Chad had tried calling Stephanie several times. Steve Johnson (Stephen Nichols) was by her side, and she had talked to Tripp and Joey Johnson (Lucas Adams, Tanner Stine) on the phone. No one could reach Stephanie, and Chad, on the heels of losing Kate Brady (Lauren Koslow) who he was very close to, he took off on an in-person hunt.

Days Of Our Lives Spoilers: Nicole Tries To Fix Eric, Eric Blames Her For His Bad Behavior?

Meanwhile, Alex had been in bed with Stephanie having sex for the first time-actually, several – and he had kept pressing ignore on her phone and finally turned it off. It was only after Chad had tracked them down at the Kiriakis mansion in his bedroom and interrupted, did Stephanie know her mom was in trouble and the three left together.

Unfortunately, by the time they got there, it was too late. Stephanie rushed into her mother’s hospital room to find her father collapsed in tears, and Kayla Johnson (Mary Beth Evans) had just died. Stephanie learned Kayla had been asking for her but she couldn’t cling to life long enough for her daughter to get there, and she couldn’t tell her mom goodbye. All Alex could do as he could hear her break down and sob is feel guilty for his selfish actions and he talks to his brother Sonny about his regrets. Sonny is horrified – both for the deaths of Kate and Kayla, and that Alex hit ignore when Chad was trying to call, and he urges Alex to come clean to Stephanie.

Days Of Our Lives Spoilers – What If She Realizes It On Her Own?

Alex knows that Stephanie knows that Chad had called, and called, and called, prior to barging in on them in the middle of their sex romp. Chad told them when he arrived, and Sonny, upon hearing that, tells Alex he must tell Stephanie before she figures it out on her own, and ask for forgiveness. It doesn’t matter that Alex had no way of knowing what Chad was trying to call about, that’s not the point.

The point is that Alex had no business pressing ignore on Chad’s calls or shutting Stephanie’s phone off – it was not his right. Sonny doesn’t know how Alex can make anything right with Stephanie after this, but he’d better try before she confronts him first.