The Bold And The Beautiful Spoilers: Katie Pleads With Bill To Abandon Sheila, How Far Will She Go? 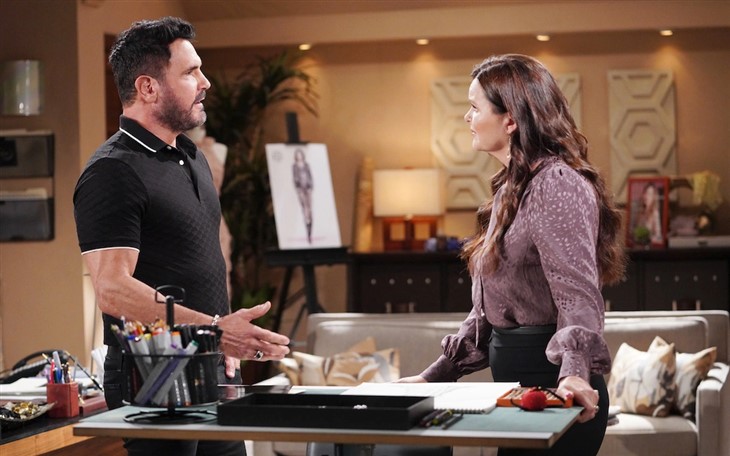 The Bold And The Beautiful spoilers indicate that Katie Logan (Heather Tom) will plead with Bill Spencer (Don Diamont) to abandon Sheila Carter (Kimberlin Brown). How far will Katie go to get Sheila out of their lives?

The Bold and The Beautiful spoilers reveal that Katie is terrified for Sheila to be back out on the streets. Sheila has shot her sister. Sheila caused Brooke Logan (Katherine Kelly Lang) to start drinking again. Sheila ruined Brooke’s marriage. Sheila even shot her own son.

Now that Bill feels everyone has abandoned him, he has aligned himself with Sheila almost for a punishment. Katie is truly worried about what Sheila could do to Bill. Katie honestly thought that Bill was a hero but look what has happened. Instead of putting Sheila away, Bill is now living with her and supplying her with every need.

B&B Spoilers – Will Katie Logan Give Up Her Happiness?

Bill wanted Katie to come back to him but she refused. Katie feels partially responsible for how far Bill has fallen. Now, Katie feels obligated to help Bill to pull himself out of this funk that he’s in. Katie has just started a new relationship with Carter Walton (Lawrence Saint-Victor). However, Katie is very loyal to her family as well. Will she sacrifice her happiness to help Bill?

Katie believes that she can get through to Bill. However, Katie is going to have to do more than just be his friend. Perhaps Katie will offer to come home if Bill sends Sheila to prison where she belongs. Will Katie come back to Bill if he follows through with this? Is there some other way to put Sheila in prison for good?

Katie knows that Steffy Forrester (Jacqueline MacInnes Wood) and John “Finn” Finnegan (Tanner Novlan) are in danger as long as Sheila is free. Katie may not be an official member of the Forrester family but she cares for them and wants them to be safe. Steffy has been cruel to Brooke as well but Sheila shot her and almost killed her.

The Bold and the Beautiful News: Here’s How Darin Brooks Works On His Fitness #bb #boldandbeautifulhttps://t.co/lJtHMIepSy

Katie believes she is the only person who can get through to Bill at this point. Katie has sacrificed a lot to be with Bill. Bill has waffled back and forth between her and Brooke for years. Katie deserves happiness but her family’s safety comes first. Will Katie go back to Bill to keep everyone safe from Sheila? Will Bill and Katie ever get back to where they were as a couple?