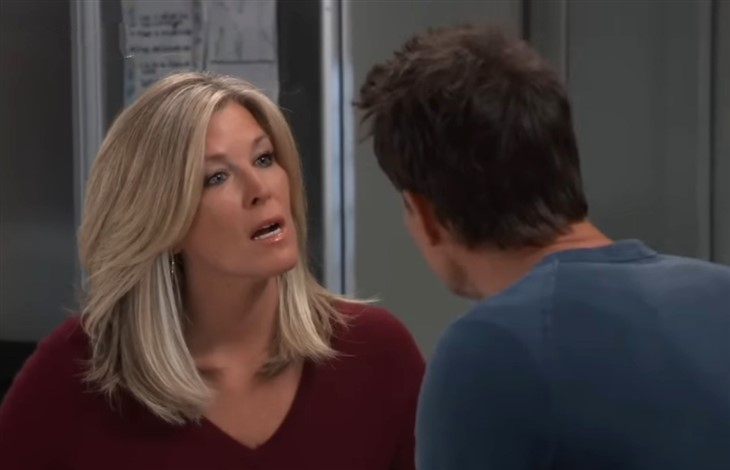 General Hospital spoilers reveal Carly Spencer (Laura Wright) and Drew Cain (Cameron Mathison) have come to blows, and their relationship may not survive what Drew has unearthed while standing in Carly’s pristine, candlelit kitchen. Carly’s lies seem to know no bounds and Drew isn’t sure what she might hurl at him next — or rather, what he might have to drag out of her. Carly wasn’t forthcoming with any of the truths Drew had just discovered.

He had to interrogate her to get to the bottom of what was really going on, and Carly still didn’t seem willing to share that she knew Nina Reeves (Cynthia Watros) was Willow Tait’s (Katelyn MacMullen) birth mother until she found out Willow was battling stage IV leukemia. Will Carly ever accept complete responsibility for her actions, or is she going to expect Drew to shoulder some of the burden because he too withheld information from her?

Drew went to Carly’s place in search of answers because he couldn’t lie to himself anymore and pretend she wasn’t trying to sabotage his efforts to find Willow’s birth parents. He wasn’t at all prepared for what he found out. He expected Carly might have a reasonable explanation for why she didn’t think it was a great idea for Willow to meet her birth parents, but he figured that was the extent of it — Carly did feel good about it. He certainly didn’t think she was cutting him off at the pass with Josian and Denise Makenzie (Alice Rietveld), and he never could have imagined she had been lying to him for the last six months or better about Nina and Willow’s DNA test.

While Drew and Carly were going round for round, Carly didn’t hesitate to clap back that Drew didn’t care to tell her Willow was sick. It is rather astounding that Carly thinks she is in any position to judge him or be angry that he didn’t reveal Willow’s secrets to Carly. After all, Willow made Drew promise not to tell anyone — and especially not Carly. Nonetheless, Carly may try to shift the blame to Drew, insisting she never would have withheld what she knew if he had all the facts. She may refuse to see that it was never her choice to play God or decide whether or not the truth was worth telling in the first place.

General Hospital Spoilers: Victor Turns on Nik — and Someone Helps Him #GH #GeneralHospitalhttps://t.co/A6qhtedq6m

Even if Drew could get over the numerous lies Carly told and the secret she kept, he may not be able to overlook the way she manages her mistakes in the wake of him finding out the truth. Carly should be pleading with Drew to give her another chance, but every time her inclination to defend herself creeps back in, Drew won’t be able to stomach that side of her. One thing is for sure, twins or not, Drew did not inherit the same blind love for Carly that Jason Morgan (Steve Burton) once had. Will these two ever be able to mend fences and find their way back to one another? Stay tuned for more GH news and spoilers to find out.