The Bold And The Beautiful Spoilers: Finn Divorces Steffy – Determined To Protect His Wife From Sheila’s Wrath? 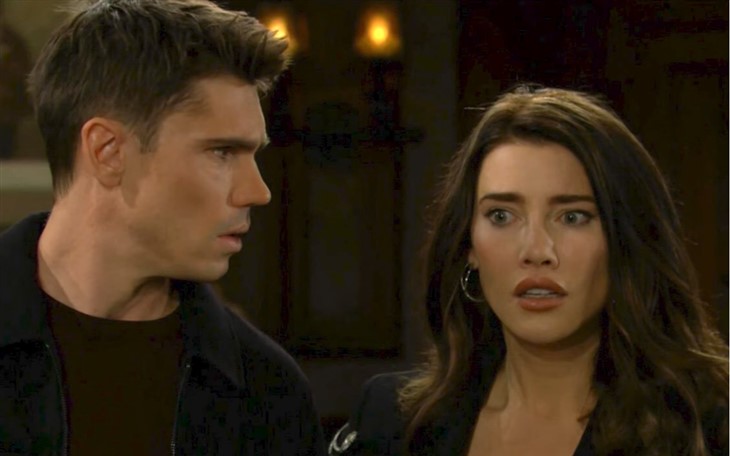 Now that Bill Spencer (Don Diamont) helped get Sheila’s charges dropped, she is a free woman and a wild card o what she’ll pull next.

Finn’s fear is escalated when he learns that Bill pulled the strings for Sheila’s charges to disappear. It’s frightening that Sheila could commit serious crimes, and Bill could have them taken care of by bribing judges or blackmailing to keep the evil villain out of prison.

Finn could let Taylor Hayes (Krista Allen) go to prison for shooting Bill in 2018. He just could not allow Steffy’s mother to take the fall to keep Sheila in prison. So, Finn and Steffy decided not to testify against Sheila, a risk that proved to backfire after Sheila was released from jail.

B&B spoilers say that Finn feels guilty for bringing Sheila into Steffy’s life and for the trauma that occurred in the alley. If he hadn’t fallen in love with Steffy, she wouldn’t have been shot by Sheila or faced any of the emotional trauma.

After Sheila’s released from jail, it’s safe to assume that she will continue to stir up trouble, only this time, she has a safety net with Bill. Steffy refuses to allow Sheila to be a part of her life, which will create tension and likely escalate where Sheila’s concerned. That’s when Finn decides he needs to take drastic measures to keep Steffy safe from Sheila’s grasp.

Sheila bragged to Steffy and Finn that she would be a part of their lives in the future. That isn’t something Steffy wants, leaving Finn to establish clear boundaries with his bio mom. However, Sheila isn’t one that respects boundaries. It will become clear to Finn that if he’s married to Steffy, Sheila will interfere and do whatever she can to get under her skin.

That could prompt Finn to rethink his marriage vows and consider divorcing Steffy to protect her and Taylor from Sheila’s wrath. With Bill willing to turn Taylor in for his shooting if they testified against Sheila, Finn becomes desperate to protect Steffy from this evil duo.

Bold and the Beautiful spoilers say that Steffy doesn’t want her marriage to end, so she will probably fight for Finn. Sheila’s interference will either make them stronger as a couple or destroy them beyond repair.

B&B fans, do you think Finn will consider divorcing Steffy to neutralize Sheila? Keep watching Bold and the Beautiful, airing weekdays on CBS and streaming on Paramount Plus. This site is a leading source for everything linked to The Bold and the Beautiful. Check back regularly for B&B spoilers and news!