The Bold And The Beautiful Spoilers: Li Shaken, Bill and Sheila’s Dangerous Alliance 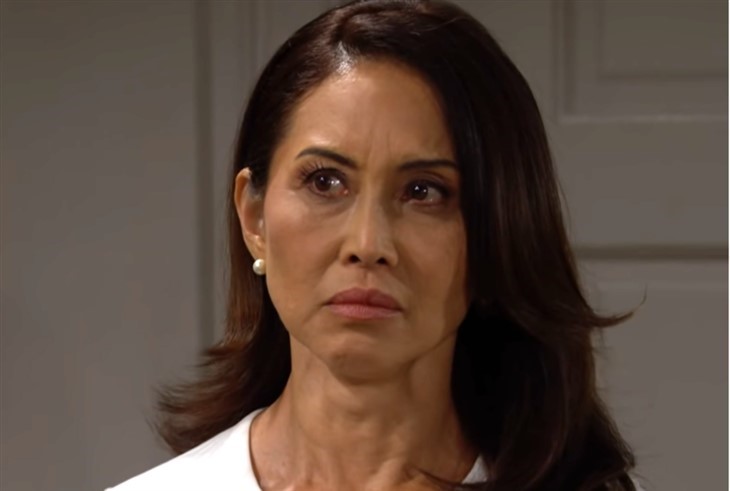 The Bold and the Beautiful (B&B) spoilers and updates tease Dr. Li Finnegan (Naomi Matsuda) believes that her family could be put into danger. Li had believed that Sheila Carter (Kimberlin Brown) was going to go to jail for shooting her son Dr. John Finnegan (Tanner Novlan) and his wife Steffy Forrester (Jacqueline MacInnes Wood). Li has found out that Bill Spencer (Don Diamont) has helped Sheila to obtain her freedom. Li will want to keep her family from being put at risk by Sheila and Bill.

Brooke and informed her that she would not be able to be a part of Finn and Hayes’ lives. Sheila wanted to kill Steffy but ended up shooting Finn instead. Sheila felt that she needed to try to kill Steffy before she left. Steffy and Finn were saved by Deacon Sharpe (Sean Kanan). Li found out that Finn was in need of medical attention and got him the help that he needed. Li was stunned that Sheila was able to find her and Finn. Sheila intended on taking care of Finn and wanted to kill Li to get her out of the way.

Li had needed help to get back to Finn. Li found the help that she needed from Bill. Li had wanted Bill to save Finn from Sheila. Bill was able to get Finn away from Sheila. Bill helped to reunite Finn and Steffy. Li believed that Bill wanted the best for her family. Li has found out that Bill has gotten into a relationship with Sheila. Bill was able to prevent Finn and Steffy from testifying against Sheila because he used Steffy’s mother Dr. Taylor Hayes (Krista Allen) against them. Bill knew that Taylor had shot him because she thought that he had taken advantage of Steffy. Bill and Steffy had been in a relationship in the past. Bill threatened to go to the police and have Taylor arrested. Bill told Steffy and Finn to drop the charges against Sheila. Finn and Steffy did not want to drop the charges but Steffy did not want Taylor to get into trouble with the law. Bill was able to manipulate the situation to help Sheila get her freedom because Finn and Steffy did not take legal action against Sheila. Li may find out that Finn and Steffy had given into Bill and Sheila’s demands to keep Taylor from having legal problems.

The Bold And The Beautiful Spoilers – Dr. Li Finnegan Determined To Take Action To Deal with Sheila Carter And Bill Spencer

The Bold and the Beautiful Li wants to prevent Bill and Sheila from causing trouble for her family. Li does not want Sheila to be a part of Finn and Hayes’ lives. Can Li find a way keep Finn and Hayes from being around Sheila? Li may believe that she can help Steffy and Taylor to get Bill to change his mind about Sheila. Can Li help Steffy and Taylor find a way to get Bill to want to turn on Sheila? Be sure to catch up on everything happening with B&B right now. Come back here often for The Bold and the Beautiful spoilers, news, and updates.