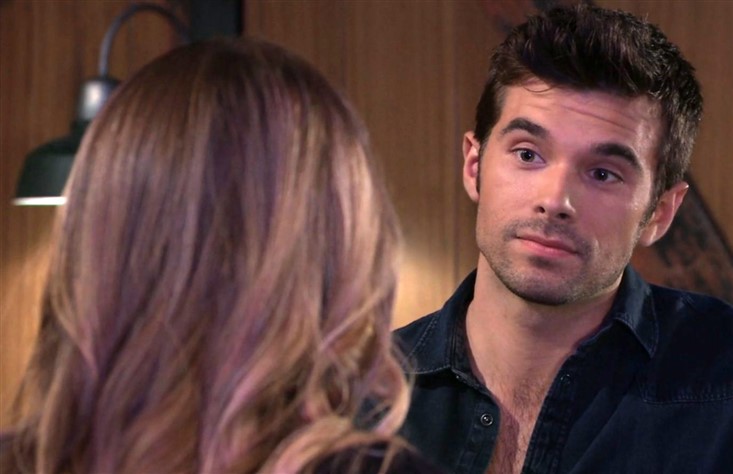 General Hospital spoilers tease that Harrison Chase (Josh Swickard) and Sasha Gilmore Corbin (Sofia Mattson) are going to be called away from their playful afternoon together to General Hospital, where they’ll hold vigil for Willow Tait (Katelyn MacMullen), along others who are close to Willow.

Yet, as close to Willow as they are, the lot of them will be taken aback by why they were summoned to the hospital. Finding out Willow is not just pregnant and weak, suffering from collapse, but that she is battling a terminal illness she may not be able to beat is going to floor her loved ones. How will Chase and Sasha be able to help each other through this time as they wonder if they’re about to lose Willow, too.

Sasha just wrapped up a long but welcomed chat with Cody Bell (Josh Kelly) in which they discussed the similarities between Britt Westbourne’s (Kelly Thiebaud) and Brando Corbin’s (Johnny Wactor) deaths. Little did they know both Britt and Brando went out as they were fighting to save Josslyn ‘Joss’ Jacks’ (Eden McCoy) life. Sasha managed to get through the holiday season without Brando or their son, Liam Mike. However, the sting of their loss is even stronger in the New Year as everyone goes back to their busy lives and Sasha lives in the silence left behind from losing her husband and child. Does she really need to lose her closest gal pal, Willow, now too?

Sasha and Chase are expecting to find Willow being treated for leukemia, but they certainly won’t expect to hear Nina is Willow’s long-lost birth mother — or that Carly knew about it and covered it up for months! Once upon a time, Sasha was pretending to be Nina’s daughter, and they’ve come a long way ever since in mending fences and becoming more than friends; they’re like family again. Sasha believes Nina and Willow will be able to get to the same place, eventually. Sasha might believe that if she holds out hope for Willow to have a relationship with her mother, and for Nina to finally have a daughter who isn’t missing or dead, perhaps that hope will help Willow pull through.

Weathering the storm of emotions as they wait to see if Willow will wake up might serve as a bonding experience for Chase and Sasha, who are both recovering from different kinds of heartache. As Sasha moves through this difficult experience, it will help that Chase knows just how she feels about Michael and Willow. They’ll see each other through it, and as much as Chase may have felt the bittersweet reminder of what he lost with Brook Lynn Quartermaine (Amanda Setton) before he jetted off to the hospital with Sasha, he’s going to keep moving forward. The question is — will it be with the face of Deception? Let us know what you think and keep checking back with us for more General Hospital news and spoilers just ahead.