The Bold And The Beautiful Spoilers: Bill Professes His Love To Sheila – Couple Solidifies Their Relationship By Making Love 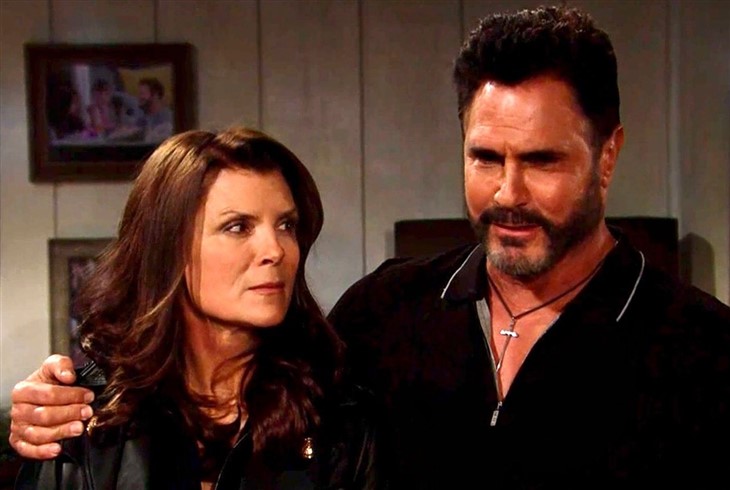 The Bold and the Beautiful (B&B) spoilers tease that Bill Spencer (Don Diamont) is ready to take his relationship with Sheila Carter (Kimberlin Brown) to the next level. On Friday’s (January 13) show, Bill told Sheila that he loved her in front of Steffy Forrester (Jacqueline MacInnes Wood) and Taylor Hayes (Krista Allen).

Sheila was pleased to hear Bill’s love declaration. She never said she loved him back but said that all she’s ever wanted was to be loved and accepted. Steffy and Taylor leave Bill’s house after they realize that Bill has lost all common sense, and they won’t be able to convince him to kick Sheila to the curb.

Don Diamont shared with Soap Opera Digest that Bill has found acceptance for the first time in his life. Katie Logan (Heather Tom) and Brooke Logan (Katherine Kelly Lang) loved him, but they wanted to change him. Sheila is protective of Bill while giving him the freedom to be who he wants to be without the fear of being judged by his actions.

B&B spoilers say that is why Sheila is the perfect woman for Bill right now. The actor shares that Bill isn’t feeling good about himself and believes that he deserves Sheila. He doesn’t think he deserves better and refuses to put the work in to improve his life.

To solidify their bond, Bill and Sheila make love, vowing to be there for each other no matter the circumstances. It’s clear to almost all the B&B viewers that Bill isn’t in a good place and needs someone to intervene before Sheila convinces him to hurt someone he loves.

Liam Spencer (Scott Clifton) and Wyatt Spencer (Darrin Brooks) try to reach their dad and get him away from Sheila. But he refuses. Katie tries to talk to her ex-husband, pleading with him to turn his back on Sheila. Again, he blocked her efforts.
Bill makes it clear to his loved ones that he and Sheila are a couple now, and if they can’t accept it, they can hit the highway and never look back.

“Nobody can reach him. Not Katie. Not his children. Probably not even Brooke. He’s keeping his people at arm’s length, and right now, Sheila is his sanctuary,” Diamont added.

B&B fans, are you surprised Bill turned his back on everyone for Sheila? Keep watching Bold and the Beautiful, airing weekdays on

CBS and streaming on Paramount Plus. This site is a leading source for everything linked to The Bold and the Beautiful. Check back regularly for B&B spoilers and news!