The Bold And The Beautiful Spoilers: Liam And Wyatt Confront Bill Over Sheila 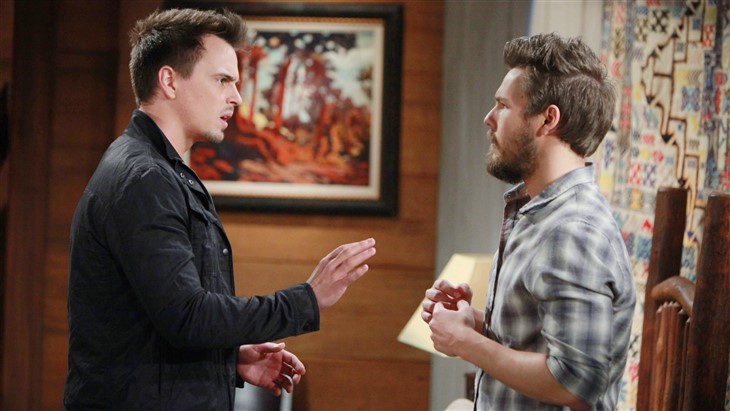 The Bold And The Beautiful spoilers reveal that both Liam Spencer (Scott Clifton) and Wyatt Spencer (Darin Brooks) will confront Bill Spencer (Don Diamont). Liam and Wyatt have been very worried about their father. Now the boys have a real reason to be concerned. Can Liam and Wyatt get through to Bill?

The Bold and The Beautiful spoilers reveal that both Liam and Wyatt are shocked to find out that Bill is in a relationship with Sheila. Wyatt and Liam find this out from different individuals so the two of them will likely compare notes before approaching Bill. However, neither of them is the least bit happy over this development.

Liam and Wyatt confronted Bill before only to have everything brushed under that rug. Both Liam and Wyatt knew that Will turned Sheila in to the cops and now they find out they are dating, this is very strange, and hard to process it. Why is Bill with Sheila? How could Bill allow himself to get involved with Sheila of all people?

B&B Spoilers – Liam Spencer Sees This As A Betrayal

To Liam, Bill is not just in a relationship with Sheila, Bill is sleeping with the enemy. How can Bill forget what Sheila did to Brooke Logan just last year? How can Bill possibly overlook the fact that Sheila shot her own son and almost killed Bill’former daughter in law? Bill is the one who saved John “Finn” Finnegan (Tanner Novlan) from Sheila.

Bill saved Li Finnegan (Naomi Matsuda) from the streets after Sheila almost killed her. Li is the one who led Bill to Finn. Bill was so moved that he flew Finn to Monaco to reunite him with his wife and kids. Bill wanted nothing more than to see Sheila in prison them. Why in the world would Bill be dating Sheila now? Bill’s actions make no sense at all.

The Bold And The Beautiful – Has Bill Spencer Lost His Mind?

Liam and Wyatt cannot comprehend this pairing. What is their father thinking? Liam, especially, cannot wrap his mind around his father moving on with Sheila. This is weird, it’s strange, it’s in some ways disgusting and Liam has no idea how to process it. Liam is just floored by the possibility of Bill and Sheila moving ahead.

Liam and Wyatt feel that their father’s explanation is pure BS. Liam knows they are missing something in this situation and they want to know what. Liam is at his wits end about what to do next but this makes no sense. Liam needs answers and plans to get to the bottom of this before it is too late. Can Liam and Wyatt save Bill from himself?