Bold And The Beautiful Spoilers: Bill Spencer’s Under Sheila Carter’s Spell, Could Will Spencer be His Saving Grace? 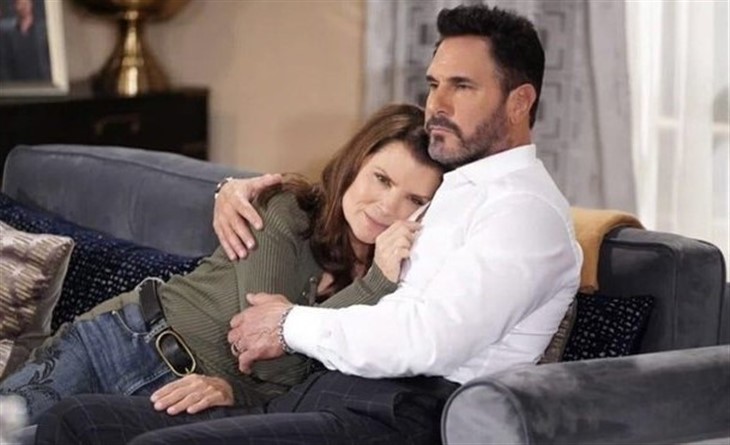 The Bold and the Beautiful Spoilers reveal Bill Spencer (Don Diamont) pulling a lot of strings to ensure Sheila Carter (Kimberlin Brown) is a free woman. We all know that Bill can be a very manipulative man who does what he can to get what he wants. I would suspect that Sheila has hypnotized Bill to do her bidding because I just can’t see him betraying loved ones this badly at his own will. We also know that if Sheila has a personal vendetta against you, she will torture you by any means necessary to make you suffer. Since Sheila thinks that this is all Steffy Forrester-Finnegan’s fault she is going to make sure that she tortures her the worst.

Now that everyone is finding out about Bill’s betrayal everyone is going to start coming after him. I am hopeful that someone will notice how different he is acting. He doesn’t really look anyone in the eyes and even the suave and charming part of his personality is gone. Since we don’t know what happened with the two of them when they first ran into each other it could be that Sheila has hypnotized him. It would make perfect sense too, I am sure that Katie Logan (Heather Tom) and Brooke Logan (Katherine Kelly Lang) will try to get through to Bill with no luck.

The Bold And The Beautiful Spoilers: Li Shaken, Bill and Sheila’s Dangerous Alliance

The Bold And The Beautiful Spoilers – Could Will Spencer Be The Key To Winning Bill Spencer Back From Sheila Carter?

Bold and the Beautiful Spoilers reveal Sheila and Bill have been talking about how there is going to be an angry mob at his door now that he has secured Sheila’s freedom. The biggest reason I think she has to have brainwashed him is the fact that he will not listen to anyone that is close to him. She easily could have made him believe that everyone is out to get him, they never loved or cared for him, etc. I just wonder if Sheila took the time to really study BIll and his many children. She knows about Liam Spencer (Scott Clifton) and Wyatt Spencer (Darin Brooks) but does she know about WIll Spencer?

We heard briefly during the holidays that maybe Bill would meet up with Will and spend the holidays with him so since he is not in L.A. at the moment unless Sheila specifically remembered him if she did in fact hypnotize Bill to betray his family Will could be the one who snaps him back to reality.

The Bold and the Beautiful Spoilers: Taylor Feels Guilty And Responsible For Sheila’s Release #bb #BoldandBeautifulhttps://t.co/2UWKopOL3n

Seems to me that Will is at the perfect rapid age processing age so, I am sure that an adult WIll would be able to knock some sense into his dad. The only thing I could see happening is Sheila trying to make sure Bill doesn’t snap back to his senses by making sure he hurts or betrays Will in some way. I don’t know if that will be possible, if Bill happens to see WIll before Sheila can work some more of her magic it could make her chance of freedom be called into question. Hopefully this is something like that with Bill. I know he is not always the good guy but he wouldn’t do something like this unless he was under the control of someone else.