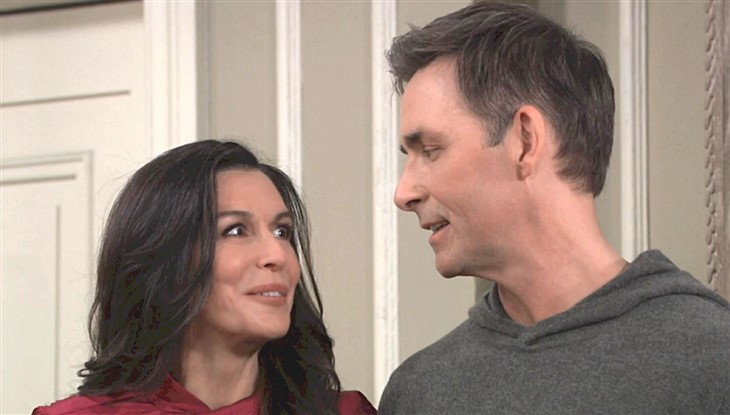 General Hospital spoilers reveal Anna and Valentin still trying to clear Anna’s name when nobody back home in Port Charles seems to be giving them a moment’s thought.

General Hospital Spoilers – Vanna On The Run And On Their Own

It’s been months since Anna Devane (Finola Hughes) was framed for shooting and killing Lucy Coe (Lynn Herring) and was forced to go on the run, first on her own and then with Valentin Cassadine (Charles Shaughnessy) finally joining her. We have only seen them a handful of times since then and learned they had been living in a windmill.

A meeting with Andre Maddox (Anthony Montgomery) gave them some information on where Victor Cassasdine (Charles Shaughnessy) might be holding Lucy, since it has also been quite some time since they learned she was really alive, but why is nobody helping them?

Oddly, Robert Scorpio (Tristan Rogers), who knows exactly how Victor and Holly Sutton (Emma Samms), framed Anna, does not seem to care about his Annie as he tries to protect Holly. A man like Robert should be able to save both these women at the same time, but perhaps that would be consistent and ruin some plot points in Port Charles, even if it is out of character. This means Anna and Valentin have been trying to solve a solved case by themselves.

To that end, they make their way to France, which is where Victor has a secret fortress, according to Andre. They think Lucy is there and learn they are right, but they have to find a way to get into this highly-guarded place.

“The problem is, the whole place is completely airtight,” Finola Hughes said in the January 23, 2023, issue of Soap Opera Digest. “We can’t get in through the front or the back. The guards are well-trained and they don’t take breaks…However, there is a way in and someone who comes onto the scene brings that information to them.”

That someone is an old female associate of Valentin’s and Anna doesn’t trust her as far as she can throw her. Then again, Valentin didn’t trust Andre at all. Is this a case of jealousy or are Anna’s instincts correct? Stay tuned to General Hospital weekdays to see how these stories play out.