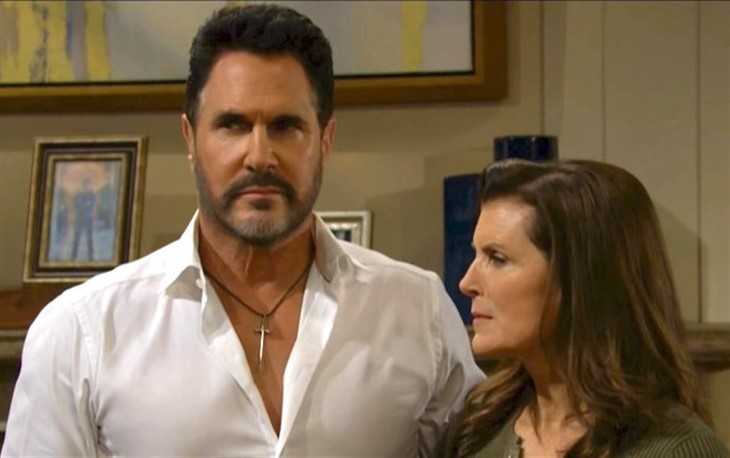 The Bold and the Beautiful (B&B) spoilers tease that Sheila Carter (Kimberlin Brown) could have murder on her mind. Sheila is doing a good job of manipulating and controlling Bill Spencer (Don Diamont), but at some point, she could lose control and resort to an evil plot.

Sheila won’t tire of Bill for a little while. But eventually, she will grow tired of their life, especially since everyone they know despises her. That’s when she could move to set herself in a very good place financially.

The Bold and the Beautiful Spoilers– Will Bill Spencer Marry Sheila Carter?

Bill’s next move will probably be a marriage proposal. B&B spoilers state that Bill knows that Sheila wants stability in her life, so if Bill pops the question, she will probably say yes. In fact, marriage to Bill is the next step in her evil plot to take Bill’s money.

The Bold and the Beautiful spoilers reveal that Bill told his family and loved ones he wanted to be with Sheila. He doesn’t want to hear their objection to their relationship. She loves him, and he loves her, too. He said they could see themselves out of his life if they didn’t like it.

Sheila will probably feel happy as Bill’s wife for a little while. But eventually, she will get tired of Bill and the routine of life as a free woman. That’s when she’ll plot a way to keep Bill’s money and power and escape their boring life.

The growing speculation is Sheila will turn on Bill and murder him. She could decide that he’s worth more dead than alive, especially since she will be his wife by then. She may determine that plenty of other people are angry with Bill over their union, and she can frame someone else for the crime.

The Bold and the Beautiful spoilers say that Sheila will be hoping she can get away with murder and Bill’s money. She may even make a power play to gain control of Spencer Publications.

Sheila’s wrath is just beginning. B&B spoilers say the viewers will learn more about her endgame plans with Bill in the coming weeks.