Days Of Our Lives Spoilers: Allie Cheats With Alex After Chanel And Johnny’s Almost Kiss 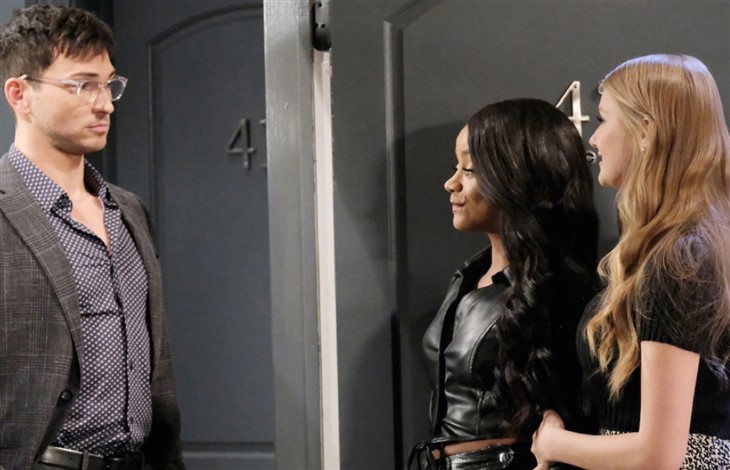 Days of Our Lives spoilers suggest that Johnny Dimera (Carson Boatman) and Chanel Dupree (Raven Bowens) will come very close to kissing as they work on a special surprise for Marlena Evans (Deidre Hall). Johnny and Chanel never really got to work through their feelings after he was possessed by the devil. Will their lingering feelings push Allie Horton (Lindsay Arnold) to cheat?

Days Of Our Lives spoilers reveal that Johnny and Chanel will come very close to kissing as they put together a slide show for Johnny’s grandmother who is dying. Johnny wants to be a filmmaker so John Black (Drake Hogestyn) feels that this will help Marlena to compromise when she wants to leave the hospital instead of dying there.

Johnny and Chanel were married for a time before the devil divorced and humiliated her. Now that Johnny has lost one grandmother and is getting ready to lose another, Chanel wants to be there for him. However, Johnny and Chanel’s kissing is wrong because Chanel is living with his sister, Allie. Will Johnny and Chanel stop before things go too far?

Allie may very well come upon Johnny and Chanel and could be the reason the kiss doesn’t happen. Of course, Chanel will likely claim that she was comforting Johnny and didn’t mean for things to go that far. However, Allie is very upset and turns to Alex Kiriakis (Robert Scott Wilson) for a sounding board. Will Alex and Allie cross that line since they have had sex before?

Alex is hurting after his breakup with Stephanie Johnson (Abigail Klein). Alex made a huge mistake that made it impossible for Stephanie to forgive him. Alex will through himself into work but unless he wants to get tangled up with Sloan Peterson (Jessica Serfaty) again, Allie may offer him some comfort. Spoilers even suggest that Allie may end up pregnant by Alex.

Days of Our Lives Spoilers: Will Allie Horton Move On With Alex Kiriakis?

Alex is a huge playboy but with everything that has been going on lately, Alex and Allie may be a very good match for each other. Will Alex settle down with Allie since he no longer has Stephanie as an option? Is this the end for Allie and Chanel?