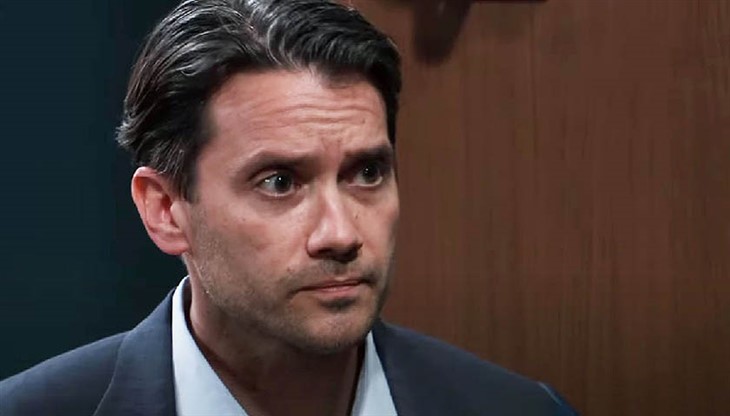 General Hospital Spoilers reveal Dante Falconeri (Dominic Zamprogna) recently asked Josslyn ‘Joss’ Jacks (Eden McCoy) to come down to the police station. Joss hurried to meet her stepbrother, hoping this may have been a personal matter. Still, she called on Diane Miller (Carolyn Hennesy) to show up as reinforcement. What Joss didn’t expect was for Dante to usher her into the interrogation room where Jordan Ashford (Tanisha Harper) and Robert Scoprio (Tristan Rogers) were waiting for her. Feeling cornered and caught off guard, Joss still didn’t reveal all she knew about the events that went down on Pier 55 on New Year’s Eve, which ultimately led to Britt Westbourne’s (Kelly Thiebaud) death. However, Joss may have bigger problems on the immediate horizon when her mom finds out where she snuck off to away from the hospital and why.

When Joss returns to the hospital, she’ll realize she must have missed quite a lot. Her family is torn to shreds and Carly Spencer (Laura Wright) and Sonny Corinthos (Maurice Benard) are at each other’s throats every time Michael Corinthos (Chad Duell) leaves the room. Clearly, her mother will have to explain what happened, and Carly might expect that Joss will jump down her throat the same way everyone else has. That’s not what will happen though, as Joss comes through as a supporter for her mom when Carly needs it most. Then, when Joss explains what happened at the PCPD, Carly is going to lose it — still reeling from her outburst with Sonny, and she’ll take the news straight to him asking him to keep his son in check.

General Hospital Spoilers: Dex Is Caught In The Middle Of Joss And Michael’s War Over Their Mother

When Carly confronts Sonny and demands that he do something about Dante’s behavior, Sonny just might grimace his laugh in her face. Dante is a grown man and doesn’t take orders from his father. Still, Carly will roll her eyes and kindly tell Sonny she would appreciate it if she dealt with Dante, issuing a veiled threat that she will if he doesn’t. This isn’t going to put the don in good spirits, and he’s going to banish her concerns and walk away as though she’s not worthy of face time with him, leaving her stunned.

When Sonny refuses to accommodate Carly’s request, she just might take it to the next best place — Olivia Quartermaine (Lisa LoCicero). Running and tattling to her bestie about Dante’s behavior might not get her as far as she had hoped, especially when Carly calls Dante’s character as a cop into question. Olivia is a protective mama bear type and her kids are off limits as far as she’s concerned. Could this be a turning point for Olivia in which she decides maybe Carly and Drew Cain’s (Cameron Mathison) relationship wasn’t worth protecting and hiding from her hubby, Ned Quartermaine (Wally Kurth)? Stay tuned for more GH news and spoilers to find out.