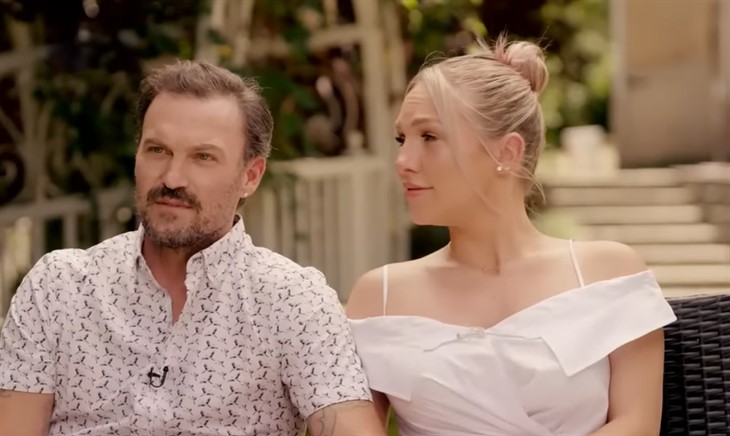 Dancing with the Stars (DWTS) pro-dancer, Sharna Burgess and Austin Green welcomed Zane Walker seven months ago, and he’s growing into a nice-looking kid, fans agree.  Sharna affectionally refers to her son as “My Mr Man.” As he starts to show his real personality now, she talked about that on Instagram on January 18. Many followers thought that what she said was simply beautiful.

Sharna sat out the tour in 2021, and fans thought that she had possibly known that she was pregnant at the time. Anyway, along came the baby and Brian Austin Green shared that Zane arrived on “6/28 at 12:12

.” Of course, they were both simply ecstatic, and soon photos started appearing on their social media platforms.

Dancing with the Stars fans initially feared that they wouldn’t see photos showing the face of Zane, That’s because one of the first photos showed just his little hand clutching his dad’s finger. However, plenty of pictures and videos arrived since then. Adorable, fans can’t get enough of the cute little baby. Since she took her baby home, Sharna can’t seem to believe that she grew such a perfect little person in her own body.

Dancing With The Stars – Sharna Talks About Zane’s Personality

On January 18, Sharna Burgess posted up a photo of herself during labor, and then she added two clips of her son. In her long caption, she said, “Every single day I couldn’t imagine loving him more and then the next day comes and I’m proven wrong.” Then she described her son as “My Mr Man, my beautiful babbling giggly and very opinionated boy.” Next, she talked about how it feels as though she simply carried a complete person inside her body.

Dancing with the Stars fans saw that she explained how she feels. She added, “It’s that they turn up who they are already. Their isms, quirks, personality … it’s a part of the soul that lives within the body.” So, she gets the idea that she can’t really shape her son’s personality. In fact, she pointed out. “My job is not to create anything for him other than a safe loving environment that can nurture who he is already meant to be.”

Dancing With The Stars – Zane Chose His Own Life’s Path

Dancing with the Stars fans saw that Sharna Burgess believes that her son chose her to be his mom. So, they need to just “give him [the]opportunity and support to thrive on this life path that he chose.” Additionally, he needs some gentle guidance but he will create “his own moral compass and belief systems.” The former ABC star ended by saying, “all we can do is our best, to not control or create or change them, but to understand they are the writer director and star of their own movie and we are simply their supporting role.”

what are your thoughts about her philosophy? Do you agree that people choose their won parents? And, that they are pretty much complete little souls in their tiny baby bodies? Let us know in the comments below.

Be sure to catch up on everything happening with the DWTS cast right now. Come back here often for more Dancing with the Stars spoilers, news, and updates.