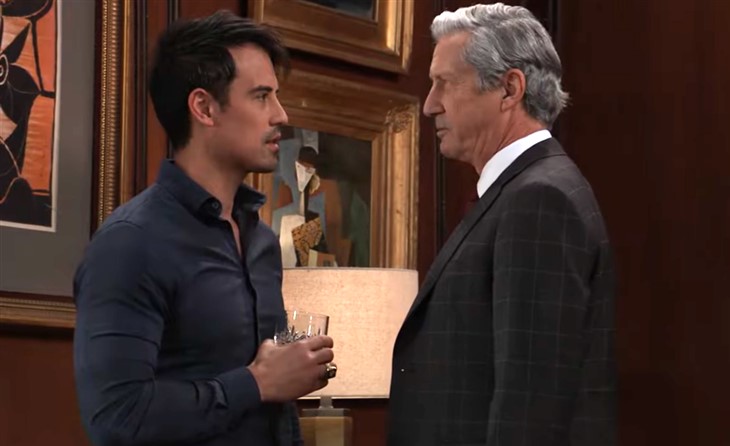 General Hospital Spoilers reveal Victor Cassadine (Charles Shaugnessy) is about to choose sides in the divorce between Nikolas Cassadine (Marcus Coloma) and Ava Jerome Cassadine (Maura West). His pick for a winner will stun his nephew, Nik, who is clearly on the losing end. When Vic teams up with Ava to take Nik down, Laura Collins (Genie Francis) will be watching from the sidelines with anxiety. She knows Vic has too much dirt on Nikolas and could ruin him. The potential outcome here is far worse than Ava running off with the keys to the castle.

When Ava decided she was divorcing Nikolas, anyone who knew her could have guessed that she would go after him for all he’s got. She doesn’t just want his bank account; she wants his home — what came to be her home, before she voluntarily displaced herself when he cheated with his son’s teenage girlfriend. Wyndemere represents the Cassadine dynasty, and Ava seeks to take it off their hands permanently. Will Nikolas’ mistake cost the entire Cassadine clan their family estate in one fell swoop? Not if Victor has anything to say about it.

Make no mistake, Victor isn’t looking out for Nikolas’ best interest. He’s only focused on what’s going to help himself. However, he knows Ava has the ammunition to take Nikolas down. So the only way Vic stands a chance at hanging onto Wyndemere himself is if he hitched his wagon to Ava’s. When Victor chooses Team Ava in the divorce, Nikolas will be beside himself. He knew his uncle was sinister enough to issue veiled threats and hold evidence over his head of his hostage situation with Esme Prince (Avery Kristen Pohl), but he never thought he would turn on him and help Ava strip him of everything he owns. Laura tried to warn him, but it may be too late for Nik to learn this lesson any way but the hard way.

Nikolas isn’t going to see an easy way out of this mess because there isn’t one. Feeling as though no one is on his side, he just might jump ship. That’s not out of character for him, and although he hurt everyone he loved in the past by faking his death for four long years, it may not be beyond him to take that path once again. However, he could just go on the run, but escaping the authorities and staying off their radar forever is no small task, so a staged death could be the one way he can ensure they won’t come looking for him. Will Ava win out in the end, or might she only feel haunted by Nik’s presence in that big, lonely castle? Stay tuned for more GH news and spoilers just ahead.