The Bold And The Beautiful Spoilers: Brooke Begs Bill To Save Himself From Sheila, Sheila Plots 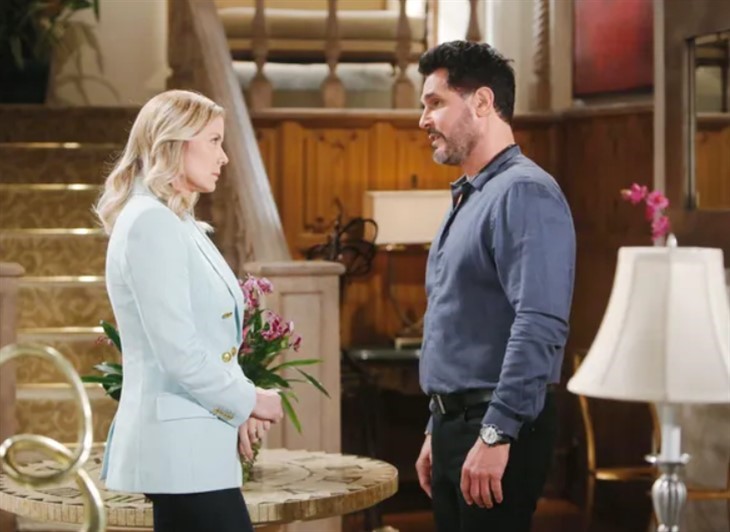 The Bold and The Beautiful spoilers and updates tease that Sheila Carter (Kimberlin Brown) was plotting while Brooke Logan (Katherine Kelly Lang) was pleading! Brooke begged Bill Spencer (Don Diamont) to save himself from Sheila right in front of her, and Sheila felt threatened – so she was plotting plan B to get rid of her.

When Brooke found out from Liam Spencer (Scott Clifton) that Bill had gotten involved romantically with Sheila, she was horrified. She knew there had to be something wrong for that to happen, and she felt sure she could get through to him to put a stop to it. As Sheila and Bill were in the living room of his condo, Brooke just marched right in and told Sheila this was not Sheila’s home it was Bill’s when she protested.

Bill told Brooke he and Sheila were together now, and that they love each other and he’s in control. Brooke reminded him of their love and times together and how dangerous Sheila is, and thought she’d gotten through when he agreed with her.

B & B Spoilers: Brooke Logan Sees Bill Spencer Not In His Right Mind

As Bill reassures Sheila they are together and not even Brooke can separate them, Sheila feels threatened, but Brooke sees Bill’s not in his right mind. Sheila starts answering Brooke’s questions to Bill until Brooke asks him can’t he speak for himself, and when he does, Brooke sees it – Bill’s had some kind of mental breakdown. Of course, Brooke feels Sheila is taking advantage of Bill’s broken condition if indeed she isn’t contributing to it-but Bill just keeps on defending Sheila and their love. But Sheila keeps thinking of a backup plan just in case Brooke or someone else gets through to him, although she thinks she’s got him under control.

The Bold And The Beautiful Spoilers: Bill Spencer Promises A Future

As far as where Bill’s mind and heart are, they are fully with Sheila, and he reassures her again he’s not letting her down. She knows who and what he is and he knows who and what she is, and they accept each other unconditionally, which is what they’ve both so desperately needed. Bill doesn’t care what anyone else thinks, and that includes Brooke, Liam, and his other son Wyatt Spencer (Darin Brooks).

He’s fully prepared to move forward with Sheila, even marry her if she’ll have him. This is the love and the woman he feels is his true soulmate now, and he’s embracing it.