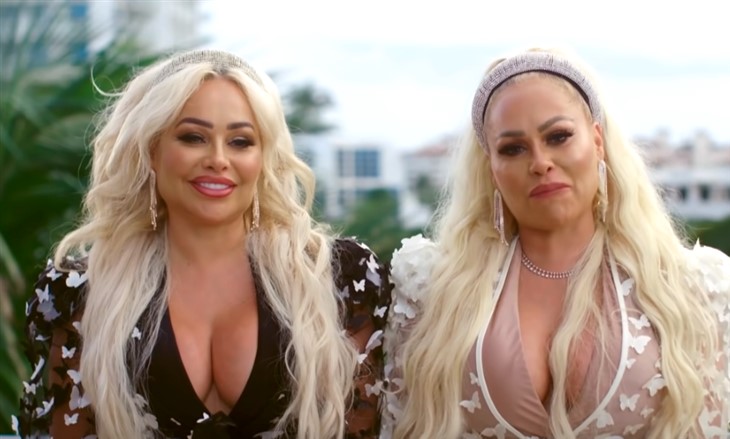 90 Day Fiance stars Darcey and her sister, Stacey Silva are about to enjoy the latest premiere of their spinoff, “Darcey And Stacey.” If you don’t know, it arrives on TLC on Monday, January 23. Ahead of the show, some folks claimed they wouldn’t watch it again because of all the plastic surgery they had. There’s a sense of sadness as many people feel they went over the top with it. Well, an old photo that revealed them from years ago, seems to prove they were always attractive. So, some people wonder why they were so addicted to the knife.

The TLC shows were not the first time that the two sisters appeared on the screen. Back in 2013, they worked with their dad, Miker, and helped shoot produce the movie, “White T.”  And, the sisters also appeared in it in a small way.  Then in 2018, Darcey reportedly landed a role in a 2019 movie. But her name’s not on the IMDb cast list for  “My Adventures with Santa.” Perhaps she was busy with TLC’s “Before the 90 Days.” Actually, she and her sister and even her kids appeared in various spinoffs of the franchise.

90 Day Fiance fans noticed that Darcey waded through Jesse Meester and Tom Brooks. Then, she was with Georgi Rusev in on-again-off-again circumstances. That happened in the new spinoff, “Darcey And Stacey.” One thing that stood out about the two women, is that they kept on getting plastic surgery. But Darcey seems to have literally transfigured herself. Some folks think that she needs a lot of mental health counseling as she started out attractive.

This weekend, a photo posted by U/NorthvilleCoeut on i.reddt was shared by @rewatchreality on Instagram. The original caption said that it shows the sisters when they “looked like Darcey and Stacey.” Unfortunately, it didn’t say where it came from.  But it is on TLC’s “Darcey and Stacey’s Throwback Album.” The admin on Instagram wrote, “Darcey & Stacey before and after.” Naturally, fans took to the comments section to talk about the two photos.

90 Day Fiance fans who commented mostly said things like this: “Both were pretty girls. Why why would you want to change your looks so much? Need to be more normal looking again. Especially Darcey.”

Another follower noted, “Watching their special last night it was sad what they have done to themselves. They have just gone too far. I hope Darceys girls realize how beautiful they are and they don’t need any of that.”

More than one 90 Day Fiance fan said they find it painful to see such pretty girls disfigure themselves. This comment also arrived: “Crazy thing is… they actually look wayyyy better before.”

What are your thoughts? Let us know in the comments below.

Be sure to come back for everything happening with the TLC cast right now. Check with us often for more 90 Day Fiance news, spoilers, and updates.