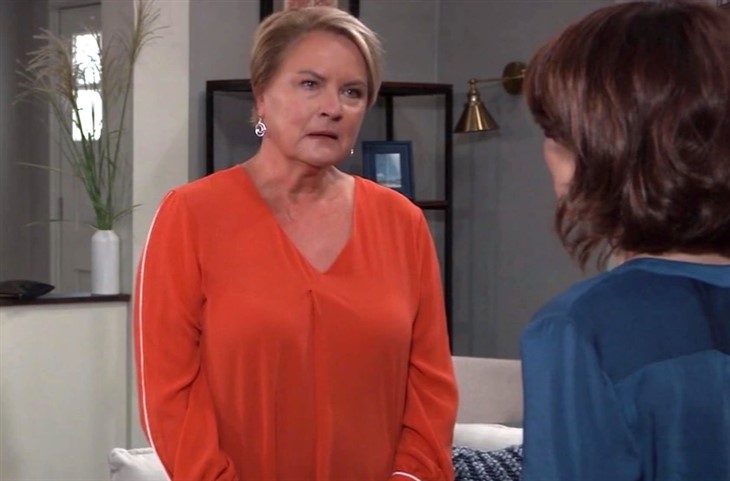 General Hospital spoilers reveal Elizabeth getting the shock of her life when her mom shows up in Port Charles.

The last thing Elizabeth Webber Baldwin (Rebecca Herbst) expects when she sits down at Kelly’s to relax and browse her phone is to see her mother, Carolyn Webber (Denise Crosby), appear before her. She thought she left her parents and their sad lives behind in California, but first Jeff Webber (William Moses) showed up to try to make amends, and now Carolyn is standing in Kelly’s wanting to talk.

Elizabeth doesn’t want to talk because she has enough problems in her life right now and dealing with either one of her parents just adds to all that. Still, Carolyn is determined.

“She knows it could go really wrong but she can’t live with herself if she doesn’t take the shot,” Denise Crosby said in the January 30, 2023, issue of Soap Opera Digest. “She wants to make a connection with her daughter and try to make amends for something that is almost impossible to make amends for.”

While Elizabeth is resistant towards her mother, a part of her does get that Carolyn is remorseful. Still, will it move her?

It also turns out Carolyn has another reason for being in Port Charles. Nikolas Casadine (Marcus Coloma) has summoned her so she heads over to Wyndemere and Spoon Island where she meets with Liz’s pal, former lover, and fake lover for the moment.

Nikolas was intrigued when he learned that Carolyn essentially erased a memory from Liz’s life and that memory stayed buried for 25 years. Can he do that to Esme Prince (Avery Kristen Pohl) and allow all her memories to stay buried forever? Carolyn is appalled at the request until Nik explains that helping Esme remain an amnesiac also helps Elizabeth stay out of jail.

That catches Carolyn’s attention as Nik tells her all about the fact that Elizabeth is the one who helped him keep Esme hostage for all that time in the tower. Carolyn is very wary of Nikolas and what he might do next and has to consider what he is asking of her if she doesn’t want to get Liz into trouble.

Stay tuned to General Hospital weekdays to see how these stories play out.