The Young And The Restless Spoilers: Celebrating Forty Years Of Lauren 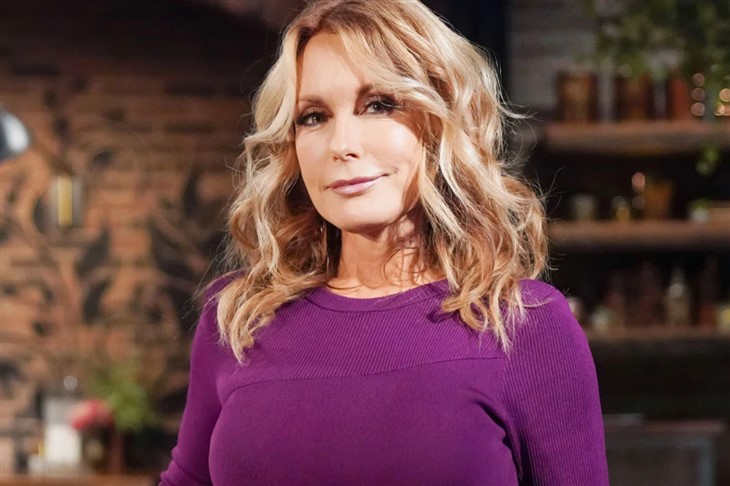 The Young and The Restless spoilers and updates tease that there will be a Lauren Fenmore Baldwin (Tracey E. Bregman) centric show airing on January 25. This marks Tracey’s fortieth year playing the iconic character, who has travelled back and forth, as many Y & R characters have, between there and The Bold and The Beautiful.

The Young And The Restless Spoilers – Lauren Baldwin Receives An Award

Lauren will be receiving a lifetime achievement award for leadership in fashion, although the awards ceremony itself will be off screen. The episode will feature lots of flashbacks throughout the years Lauren has been on the show, with some possibly being from B & B episodes since it’s celebrating the character. Tracey noted in an interview with Soap Opera Digest that there will be lots of big hair and shoulder pads in the flashbacks they will be showing from over the years.

Lauren’s family will be featured in the episode, with Zach Tinker reprising the role of her and Michael Baldwin’s (Christian LeBlanc) son Fenmore Baldwin. Gloria Bardwell (Judith Chapman) and a Fenmore’s employee, Trey (Julian Larach) will also appear.

Lauren’s first appearance on The Young and The Restless was on January 31, 1983 so the actual anniversary episode will be a few days ahead of the anniversary. She was raised by her father, with her mother barely in her life at all. When her father died, she inherited his company, Fenmore’s Department Stores. Lauren spent her late teen years singing with rock star Danny Romalotti (Michael Damian) and rival in romance, Traci Abbott (Beth Maitland). Lauren and Traci just kept falling for the same guys over and over, although Lauren was very good at getting her man, even at the expense of Traci’s feelings. Lauren was the original “mean girl”, goading and tricking Traci, who was very sensitive, constantly.

The Young And The Restless Spoilers – Sheila Carter

Sheila Carter, (Kimberlin Brown) who is now making life miserable for others on The Bold and The Beautiful, first appeared on Y & R and soon became Lauren’s worst enemy. Lauren’s first marriage was to Paul Williams, (Doug Davidson) but a stalker broke them up; Lauren then married Dr. Scott Grainger, (Peter Barton) and

Sheila started working at Memorial Hospital. She soon fell for Scott, drugged and slept with him, and became pregnant.

Lauren also became pregnant by Scott at the same time, but didn’t tell him. When the truth about the father of Sheila’s baby came out, Scott divorced Lauren and married Sheila.

Sheila eventually fled to Los Angeles, and Scott developed a rare illness and died; Lauren went to Los Angeles and started working for Spectra Fashions. This is where her connection with the Spectra family, who Sally Spectra ll (Courtney Hope) is part of started with. Lauren briefly had a relationship and marriage to Eric Forrester, (John McCook), as did Sheila, and Lauren again had to fear for her life.