General Hospital Spoilers: Ava Warns Trina That Spencer’s Motives May Have More To Do With Nik Than an Innocent Baby 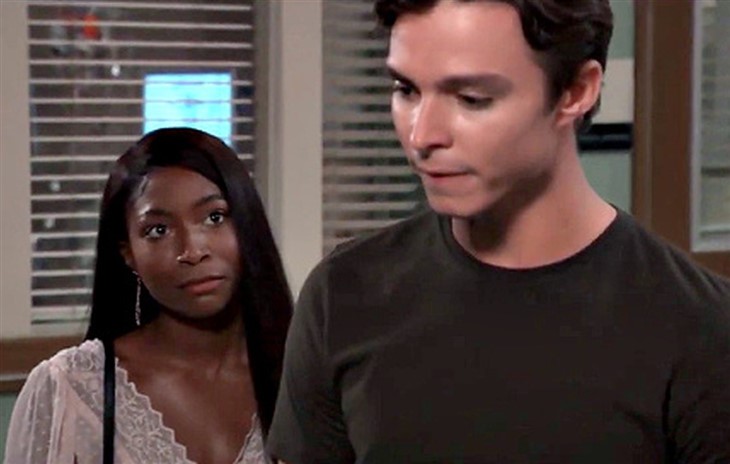 General Hospital Spoilers reveal Ava Jerome Cassadine (Maura West) might be on board to help Spencer Cassadine (Nicholas Chavez) with his revenge plan for his father, Nikolas Cassadine (Marcus Coloma), but that doesn’t mean she wants to see Trina Robinson (Tabyana Ali) get hurt in the process. When she sits down with Trina, Ava might be surprised at just how hard Trina is selling the idea of Spencer taking custody of his baby brother or sister, as well as her support of it. But who is Trina trying to convince that this is a good idea — Ava, or herself?

When Trina and Ava sit down to catch up with one another, they’ll have quite a bit to talk about. Trina has been helping her mom, Portia Robinson (Brook Kerr), get ready to marry Curtis Ashford (Donnell Turner), but Portia’s recent disapproval of Trina letting Spencer back into her life has put a strain on their relationship at what should be a happy time in their lives. When Trina dodges that discussion in favor of dishing to Ava about Spencer’s plan to pursue custody of Nikolas’ child with Esme Prince (Avery Kristen Pohl), Ava just might call her out. Why is Trina trying so hard to convince Ava she’s not only good with this plan but thinks it’s a wise idea?

When Ava inquires as to whether Trina is so insistent that Spencer’s plan is wise because she’s trying to convince Ava, or because she’s trying to convince herself, it may make Trina step back from the situation and try to look at it through someone else’s eyes. What would her mother say? She’s not ready to think about that, but she knows she’ll have to answer for Spencer’s actions soon when word gets around about what he’s planning to do. Portia certainly won’t want Trina settling down with Spencer any more when a child is going to be a part of the package. Ava might remind Trina that Portia is only looking out for her best interests, and she may encourage her to think about how altruistic Spencer’s reasons for pursuing custody may or may not be. Trina said she still wants revenge on Esme as well; is this the way to do it?

Trina really wants to move forward with her life. She just wants to be a teenage girl who is enjoying college life with her friends and kicking it with her boyfriend. If Spencer wins his revenge game, he will end up raising a baby. Trina might start to wonder how long it would be before that would start getting old. Furthermore, she’s not sure she wants anything to do with Esme’s baby, and she doesn’t love the idea of Spencer being tied to Esme forever either. As Trina ponders whether it’s fair for this innocent baby to be used as a pawn, she might come to realize she’s not so supportive of Spencer’s end game after all. Stay tuned for more GH news and spoilers just ahead.