Eastenders Spoilers: Sharon Flees As Secrets Emerge, Kathy Swoops In On The Vic? 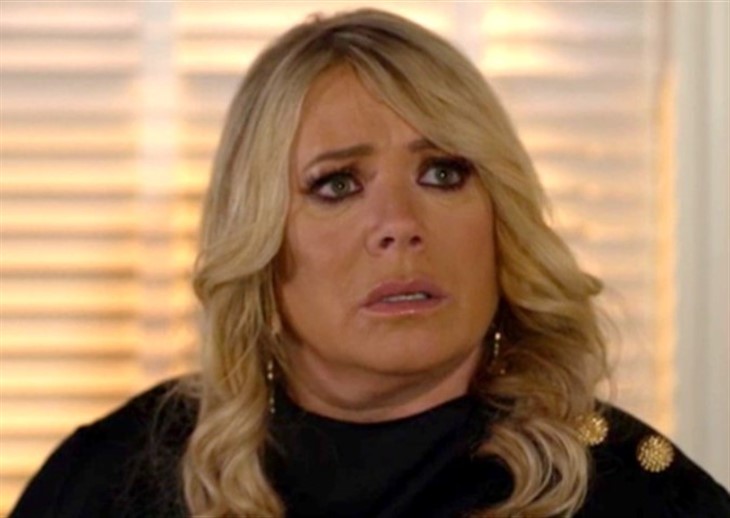 Eastenders spoilers reveal that in Walford Sharon Beale (Letitia Dean) is facing interrogations, allegations, and suspicion. Even though she tried to kill Ian Beale (Adam Woodyatt), he ended up leaving alive. However, she can’t prove that he’s not dead and as the search intensifies, her guilt could make her look more guilty. It’s possible she could flee Walford, but what happens to The Vic?

Then, Max Branning (Jake Wood) heard Sharon postponing his medical appointments to get tested. After Max learned this information, he started to question Ian. At first, he didn’t want to believe it. But as time went on, Ian started to connect the dots.

Eastenders spoilers reveal that the night came when Sharon tried to kill Ian in the hopes of avenging Denny Rickman’s (Bleu Landau) tragic death. However, Phil always knew that Sharon wouldn’t be able to do it in the end. The same night that Sharon tried to off Ian, he ended up leaving and hasn’t been seen since. He was completely broken the last time he appeared on-screen but physically was still alive. However, she is looking guilty of something sinister and the walls could close in on her very soon.

Trying to keep her guilt at bay, Sharon has allowed Kathy to take charge of the search for Ian. But secrets could emerge and more suspicious clues could have Sharon backed into a corner. She could fear that Kathy might have her arrested and make a run for it before that happens. Ian’s mother is becoming increasingly concerned and distraught over the disappearance. Max knows that Ian was being poisoned by his longtime friend and new wife. Kathy has suspected something wasn’t right, but can’t find out what it is. Until Max shares what he knows with her, of course.

It is teased by Express that Max will end up telling everyone that Ian wasn’t attacked by Tina Carter (Luisa Bradshaw-White). Kathy will be stunned and will start asking even more questions. She could downright interrogate Sharon. As Kathy gets in her daughter-in-law’s face, firing off questions and accusations, Sharon might break down and admit to poisoning Ian. If this happens, Sharon will have a hard time explaining how she didn’t kill him after all, but he hasn’t been seen since that night.

It just looks really bad, and she might be forced to flee, but what happens to The Vic? It’s very likely Kathy will take over the pub, at least until Ian is found or comes back. What will happen with Sharon, Kathy, and Max as this storyline continues? We will have to keep watching the soap to find out.