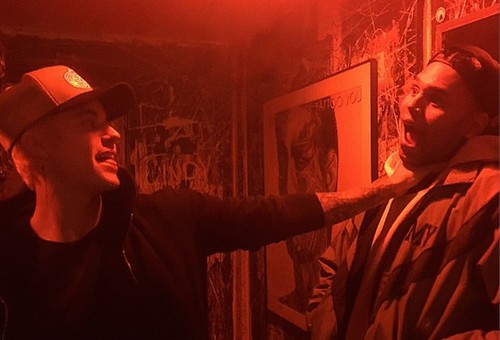 Justin Bieber is choking Chris Brown in a new picture that was just released by the singer. We can’t imagine how many people have wanted to do this to Chris since his 2009 beating of Rihanna, but we can fathom that it was a lot.

Earlier in the morning, Justin shared this picture with Chris, showing them apparently goofing off. He captioned the photo: “Had fun with the homey @Chrisbrownofficial”.

Some have said that fans of the singer have asked him to pull down the picture from the social networking website, but as of this writing, it is still available. Others have joked that Justin is telling Chris he loves him in the only way he’ll truly understand.

What do you think of the picture? Should Justin Bieber have to pull down the picture of himself choking out Chris Brown? Or should he just finish the deed already? Hit the comments and have your say below!