General Hospital Spoilers and Recap Monday, August 12 – Franco Wakes Up As Drew; Mike and Yvonne Prepare For The Wedding 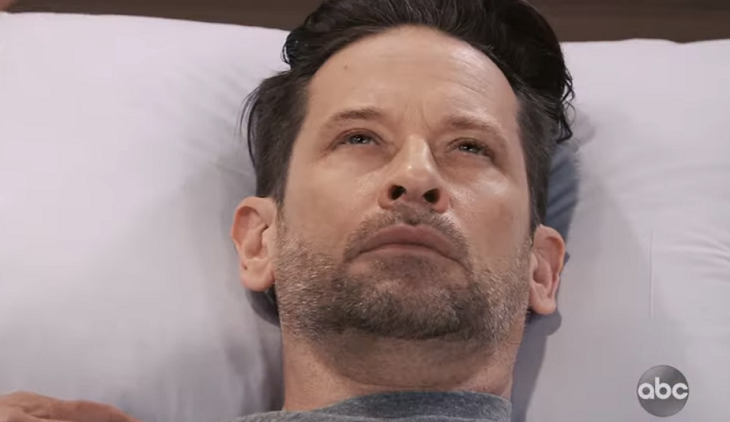 Carly offers to help Mike get ready for the wedding. Marcus Godfrey (Nigel Gibbs) arrives with a dress for Yvonne (Janet Hubert). Stella leaves with Marcus. Sonny doesn’t know if he can do this, Mike doesn’t know who he is. Carly tries to reassure Sonny and Mike joins them.

Mike tells Sonny he’s nervous and he thinks it’s strange not having family there today. Sonny asks Mike if he has a family. Mike had a wife and child, his wife died, and he doesn’t talk to his son anymore. Mike doesn’t think he can fix things now. Sonny tells Mike it is never too late and he assures him his son has forgiven him. Carly tells Mike and Sonny that the bride is ready.

Everything is included in the sale, and everyone gets to keep their job. Kristina tells Julian he is going to miss it. Kristina says Julian has been more than fair to her. Lucy promises to look at Kim’s place to sell it for her. Marcus and Stella go to Charlie’s for food. Stella and Marcus talk about Yvonne’s happiness. Stella’s unknown relative wants to meet her. Kim and Julian try to decide where they are moving to in Manhattan.

General Hospital’s Alexis Davis (Nancy Lee Grahn) is with Kevin Collins (Jon Lindstrom) and tells him she no longer sees Neil Byrne as a therapist. Alexis tells Kevin she is attracted to Neil. Kevin can’t be Alexis’ therapist either. Alexis tells Kevin to find her a woman therapist. Alexis runs into Neil on the way out of the office. Alexis has issues with the boundaries, Neil tells her they chose to part amicably, and that is OK.

Alexis arrives at Charle’s, and Julian tells her he is moving to Manhattan with Kim. Julian tells Alexis he hopes he and Sam McCall (Kelly Monaco) can mend fences. Julian excuses himself to relieve Kristina. Alexis tells Kim how good she is for Julian. Kristina asks if Alexis is OK, Neil walks into the pub. Neil and Alexis try to work, but both are bothered by the other’s presence.

General Hospital’s Cameron Webber (Michael Leone) tells Josslyn Jacks (Eden McCoy) and Trina Robinson (Sydney Mikayla) about his kidnapping. Trina thinks Cameron is joking, Joss says he’s not. Cameron tells them about running into Shiloh and how he kidnapped him. Cameron tells them the Shiloh was trying to give him Drew Cain’s (Billy Miller) memories. Cameron tells them the Franco is in a coma and might not wake up. Cameron blames himself, Joss tries to convince him otherwise.

General Hospital’s Laura Webber arrives at the hospital to check on Franco Baldwin (Roger Howarth). Drew says Franco didn’t deserve this. Laura plans to make Shiloh pay for this. Drew talks to Franco and says he wishes he had gotten there sooner. Drew tells Franco that his citation belongs to him. Drew leaves the medal for him when Franco wakes up.

Drew tells Franco that he might have been in a cell when he married Elizabeth Baldwin (Rebecca Herbst), but it’s still for life. Franco’s vitals change, and he opens his eyes. Liz and Laura come back to the room. Franco asks Epiphany for water. Kevin examines Franco. Kevin asks if Franco can tell them his name. Franco asks if that is an actual question. Liz goes into the room. Franco asks to speak to his superior officer. Franco doesn’t recognize Liz at all.

What will be left of Franco when he wakes up? Dr. Cabot's experiment could have damaged his mind in any number of ways.
A tense, new #GH starts RIGHT NOW on ABC! #RogerHowarth pic.twitter.com/FjYcZdcgIJ

General Hospital’s Epiphany arrives in Franco’s room and asks if Liz Baldwin needs anything. Liz wants Epiphany to get Franco to wake up. Epiphany tells Liz everything is pulling for Franco, he’s a real hero. Liz talks to Franco and tells him to come back to her. Liz begs Franco to wake up. Laura joins Liz and hugs her. Cameron and Liz go for a walk. Laura says she’s got the younger boys at camp and talks about how good Cameron is with the boys. Kevin tells Liz the neurologist asked him to look in on Franco.

Keep up with Hollywood Hiccups for all the latest news.