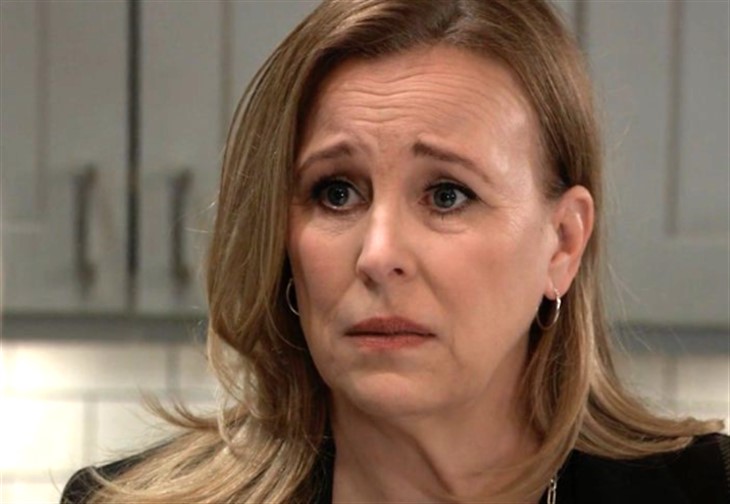 General Hospital (GH) spoilers tease that Laura Collins (Genie Francis) will have her doubts about Franco Baldwin (Roger Howarth) being killed by someone who read Peter August’s (Wes Ramsey) article in an upcoming episode of General Hospital!

General Hospital Spoilers – If Someone Was Afraid Of Franco Baldwin Because Of His Past, Why Would They Go After Him?

Laura will likely talk to her husband, Dr. Kevin Collins (Jon Lindstrom) about her theories on the murder of Franco Baldwin. Longtime General Hospital viewers will remember that Franco didn’t start out as a loving family man, he started as a psychotic serial killer! The whole premise of Peter’s article was that now that Franco had another brain tumor, after his previous brain tumor being blamed for his previous psychotic behavior, he could turn into that Franco again and be dangerous! Laura theorizes if someone was afraid of Franco because of what he was before, why would they go after him?

Wouldn’t they be too afraid of him to try to kill him? Another very valid point that Laura would have is that the location of Franco’s art studio, where he was found dead, was not something that the general public would know! That would narrow down the suspect list considerably. The only people that should know where his studio is are Elizabeth Baldwin (Rebecca Herbst), Jason Morgan (Steve Burton), and possibly Ava Jerome Cassadine (Maura West). Laura doesn’t think that either Jason or Ava would have killed Franco. Jason didn’t like him, but he allowed his son with Elizabeth, Jake Webber (Hudson West) to live with Franco and Elizabeth with Franco as Jake’s stepfather.

He wouldn’t have risked Jake hating him for murdering his stepfather, and he wouldn’t have let him live with Franco and Elizabeth if he thought Franco was still dangerous. Laura is aware that Franco had asked Jason to kill him if he became dangerous but he had not done anything except overreact from being startled awake from a nightmare, and he had made plans to check himself into Shadybrook. She knew all this from talking to Elizabeth, and Kevin can verify that – he was going to sign the commitment papers. Who would that leave?

Even though Elizabeth was the one who accused Jason of killing Franco, Laura understands why she would. But at the same time, there is no evidence that Jason did it. Kevin and Laura discuss who Franco’s enemies would be now. Sure, there could be some crazy out there who read the article and could have been stalking Franco without his knowledge and followed him to his art gallery with the intent to murder him.

But, again, Laura, as the mayor, is in constant contact with Police Commissioner Jordan Ashford, (Briana Nicole Henry) Chief of Police Mac Scorpio, (John J. York) and District Attorney Robert Scorpio (Tristan Rogers). Laura is on their hotlines and gets updates on every case they are handling. There has been no forensic evidence, no fingerprints that could not have been accounted for. The bullet dug out of Franco, however, did not come from Jason’s gun, so there is a mystery shooter.

Kevin’s brother, Ryan Chamberlain (Jon Lindstrom) would have a motive, but as far as they know he is not capable due to locked-in syndrome and it’s just not his MO, otherwise known as modus operandi or method of operation. Tom Baker’s (Don Harvey) brother Seth Baker (Michael Rodrick) is still in prison. However, there is a very obvious suspect as far as Laura is concerned.

The article that Peter August wrote is the perfect cover; Laura agrees with Jason and Robert and thinks Peter August killed him! Kevin agrees August would have a motive, means, and opportunity and they know from Dante Falconeri (Dominic Zamprogna) and Sam McCall (Kelly Monaco) that Franco was looking for Peter the night he was killed!