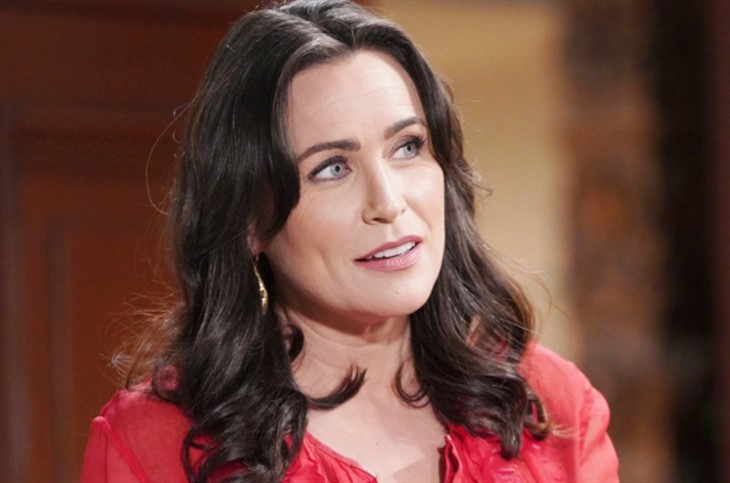 Bold and the Beautiful (B&B) spoilers tease Quinn Forrester (Rena Sofer) has a difficult choice to make. Quinn was trying to help Zoe Buckingham (Kiara Barnes) to get back with her fiancé Carter Walton (Lawrence Saint-Victor). The Bold and the Beautiful recaps reveal Zoe had turned to Quinn to get her to talk to Carter on her behalf because Carter had broken up with Zoe.

The Bold and the Beautiful spoilers show Quinn had been acting a friend to Zoe by trying to get Carter to forgive Zoe. However, Quinn started to tell Carter about her own problems. Quinn is currently having trouble with her marriage to Eric Forrester (John McCook).

The Bold and the Beautiful Spoilers – Quinn Fuller And Eric Forrester

Quinn and Eric are estranged. Eric and Quinn started to have problems with their relationship when Quinn tried to sabotage Ridge Forrester (Thorsten Kaye) and Brooke Logan Forrester’s (Katherine Kelly Lang) marriage.

According to B&B spoilers, Quinn believed that her best friend Shauna Fulton (Denise Richards) would be a good match for Ridge. She tried to put Ridge and Shauna together. However in the end Ridge and Brooke stayed together. Eric was angry that Quinn would try to break up his son’s marriage. Eric has not been able to be intimate with Quinn. Quinn has been trying to win Eric back but has not been successful. Quinn has turned Carter to get help to get her marriage back on track.

Quinn has been found comfort by telling Carter about her problems Carter has been supportive of Quinn. Carter has found himself getting closer to Quinn. He has felt that Quinn could understand how he felt about Zoe not putting him first in their relationship. Carter and Quinn tried to help each other as friends.

However, Carter and Quinn have taken their relationship to the next level on The Bold and the Beautiful. They ended up having a one-night stand. Quinn and Carter have decided that they cannot continue to see each other. Quinn still wants to try to save her marriage. Quinn wants Carter to take Zoe back.

The Bold And The Beautiful Spoilers – Quinn Fuller Has A Problem

Bold and the Beautiful Quinn does not know what she should do in regards to Eric and Carter. She wants to get Eric back. However, the damage to their marriage may be too great to repair. Can Quinn find a way to win Eric back?

Quinn wanted to help Zoe get Carter back on The Bold and the Beautiful. Will Carter decide to go back to Zoe because he had the one-night stand with Quinn? Quinn has found herself drawn to Carter. Will Quinn be able to stay away from Carter?

The Bold And The Beautiful (B&B) Spoilers Monday, May 3: Hope Is In Heaven, Thomas In Agony https://t.co/7jROdJ7Ikp pic.twitter.com/YTm9VNEcEv

What will happen if Quinn cannot give Carter up? Carter is respected by Eric and Ridge. He is the Chief Operating Officer of Forrester Creations. Would Carter lose his job and the respect that Eric and Ridge have for him if he and Quinn became a couple? What will happen with Zoe if Carter decides that he wants to be with Quinn? Quinn has much to think about in regards to Eric and Carter.

The Bold And The Beautiful (B&B) Spoilers: Are Brooke And Hope Selfish For Not…

The Bold And The Beautiful (B&B) Spoilers: Brooke’s Revenge, Blows Up Quinn’s…

The Bold And The Beautiful (B&B) Spoilers: Paris Can’t Give Quinn Free…