The Bold And The Beautiful (B&B) Spoilers: Quinn Drags Carter Down With Her 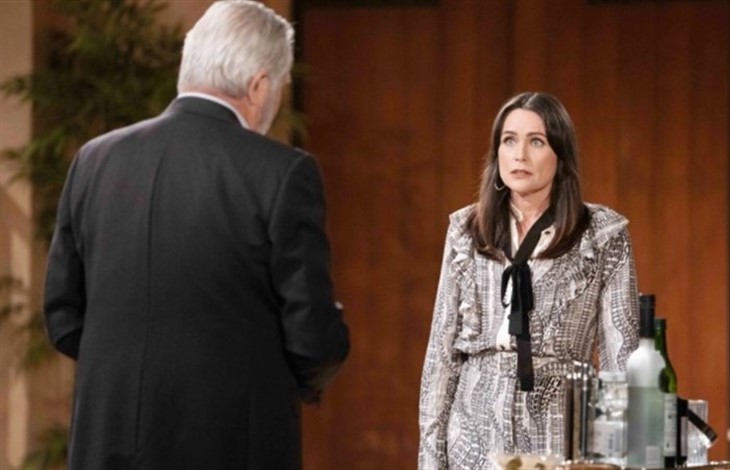 The Bold and the Beautiful (B&B) spoilers document that Quinn Fuller Forrester (Rena Sofer) said she had some type of urgent work issue when leaving her husband and Shauna Fulton (Denise Richards) at the mansion. That continued Quinn’s pattern of not being honest. As viewers saw, she bolted to Carter Walton’s (Lawrence Saint-Victor) apartment, where they shared a second connection.

Carter has a lot more to lose than Quinn on The Bold and the Beautiful. She’ll likely get some form of the divorce settlement unless Eric Forrester’s (John McCook) coming rage causes him to block her from receiving any monetary takeaway.

Quarter is forming as a legitimate couple’s option. Queric has already bit the dust, though Eric remains oblivious to that fact.

Bold And The Beautiful Spoilers – Ominous Tell To Shauna Fulton

Eric told Shauna that the betrayal of trust Quinn created last year, when she and Richards’ character tried to break Bridge, was too much. He felt that forgiveness would never be possible and ominously said that Quinn was going to betray him again.

Well, that’s already happened. The fact that Quinn left the house, moments after Shauna interceded on her behalf was incredible and simultaneously confirming.

Quinn has no shame now that she thinks her marriage is ending. That, along with her new attraction to Carter, will create dramatic daytime fireworks on B&B in the near future.

Eric is certain to be furious when he learns what Carter willfully chooses to do. As Saint-Victor’s character realized a few days ago, he betrayed his boss and someone who he thinks of as a father figure.

This scenario reminds fans of when Quinn began what amounted to a flirtatious pursuit of Ridge Forrester (Thorsten Kaye) in the recent past. Eric was mortified and deeply hurt by his adopted son’s duplicity.

But Ridge and Quinn didn’t cross the type of line that she and Carter have. The sequel to their connection at Carter’s apartment also means that this duo appears to be entering a relationship.

Eric has given Quinn the moon and the stars. But she wants to fly close to the sun and entices others, like Ridge, Shauna, and now, Carter, to join her reckless misadventures on The Bold and the Beautiful. Everyone is burned on those selfish journeys.

Quinn looked Eric in the eyes and said that she loved him. Then, she leaves the house, with Shauna still defending her, and texts Carter.

The subsequent meet-up at Carter’s apartment began as a mutual reinforcement of a secret being kept. Then, Quarter’s secret became more than that.