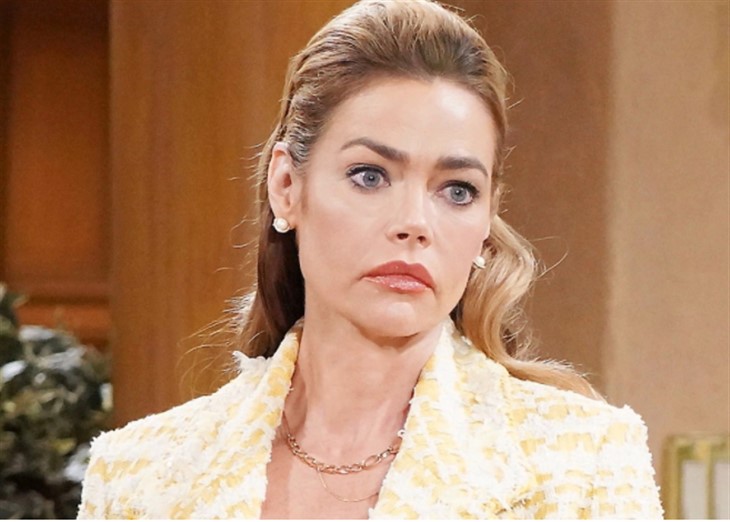 The Bold and the Beautiful (B&B) spoilers indicate that Shauna Fulton (Denise Richards) will become involved in Quarter’s affair.

After her trust with Carter Walton (Lawrence Saint-Victor), Quinn Fuller (Rena Sofer) was wrecked with a mixture of emotions. Needing someone to turn to, she confided in her friend Shauna. Quinn doesn’t want to lose her husband Eric Forrester (John McCook), but she also can’t stay away from Carter.

Although Quinn knows it’s wrong, she’s continuing her affair with Carter. However, with Carter’s ex Zoe Buckingham (Kiara Barnes) snooping around, the couple’s secret could be exposed.

The Bold And The Beautiful SpoilerS – Shauna Fulton To The Rescue

Although she broke his heart, Zoe is determined to win back Carter. She’s even enlisted the help of Quinn, who unbeknownst to her is Carter’s mistress.

Zoe suspects Carter has a new lady when she spots a woman’s jacket at his place. When Zoe catches Quinn with the jacket, Shauna comes to the rescue. Shauna claims the jacket’s hers, then reveals she’s the one seeing Carter.

With Shauna’s quick thinking, Quinn and Carter’s secret is safe. To keep up appearances, Shauna’s going to be spending more time with Carter, which won’t go over well with Quinn.

B&B Spoilers – Love In The Air For Shauna Fulton

Shauna’s been single ever since her budding relationship with Ridge Forrester (Thorsten Kaye) went to kaput. Although a romance between her and Eric was teased, nothing came of it.

Shauna helped reunite Eric and Quinn when they were separated. She’s also now assisting her friend in keeping her affair under wraps. But their friendship will be tested once Shauna falls for Carter.

As Shauna and Carter keep up this charade of being lovers eventually it’s going to turn into a reality. Shauna will get to know Carter and see why Quinn fell for him. Shauna will realize that Carter’s a good man, the kind she’s looking for.

Although Shauna knows Quinn loves Carter, that’s not going to stop Miss Fulton from hitting on the sexy lawyer. Quinn’s made it known she’s staying with Eric, and it’s wrong of her to string Carter along if they can’t be together. So Shauna feels it’s best for Carter to move on.

The Bold And The Beautiful Spoilers – Quinn Fuller’s Jealousy

When real sparks start flying between Shauna and Carter, this is going to ignite jealousy in Quinn. She’ll feel betrayed that Shauna went after her man. And when Quinn gets upset, everyone else needs to watch out.

Yet Quinn’s going to have a big dilemma. If she goes after Shauna, it’s going to raise suspicions. Everyone will want to know why the two friends are feuding.

Quinn’s life is turning into a train wreck and she may lose everyone she loves, including her best friend. Quinn can’t have it both ways and she’ll eventually make a decision. Will she leave Eric for Carter? Or will she let Carter go and let him find love with Shauna?